Click here for the Spanish version of this article

The impression it produces on the visitor is unforgettable. What hits him as he enters the edifice are the sights, smells and sounds – the color and brightness of the various offerings of candles and still more candles of different colors all around, each burning brighter than the other; the sight and smell  of the burning incense, the scent of pine strewn on the floor and the sweet aroma of flowers and of pan coleto (traditional bread of San Cristobal de las Casas) and of liquor made of sugarcane; and the not so sweet smell and sound of black and multi-colored hens, and bottles of soda (Coca Cola and Pepsi co-habit peacefully in this place); accompanied by the monotonous, rhythmic song of the j ‘iloletic (the ones who can see) – the intermediary – mediating frantically with the deities in their attempt to rescue the ch’ulel (the sick soul) of a sufferer.

The visitor is inside the church of San Juan Chamula; a municipio (municipality) in the Mexican state of Chiapas, situated about 10 kilometres (6.2 miles) from San Cristóbal de Las Casas. It is located in the Chiapas highlands, at an altitude of 2,200 meters (7,200 feet), inhabited by the indigenous Tzotzil Maya people. They speak the Tzotzil language, which is one of the Mayan languages. 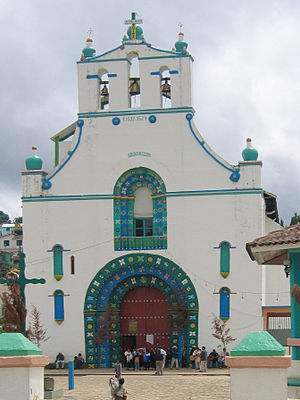 The town apparently enjoys unique autonomous status within Mexico with no outside police or military allowed in the village.

Along the walls of the church, as in many Catholic churches, are dressed-up wooden statues of saints in large wooden cases, many wearing mirrors around their chest to deflect evil. The visitor can easily identify the sick, marked by their apparent weakness and disarray, and the family identified by their concern surround the j-iloletic (the ones who can see). Oblivious to the attention being paid to him, the j-iloletic (the ones who can see) continue to make offerings and petitions to the many saints and apostles, singing for the sick, obese with multiple layers of clothing, and the mirrors located near the hearts – reflecting and radiating a super-natural light – the light of the offerings and a symbol of the power of the ones who can see.

The visitor is fortunate, and the suffering patient perhaps not so much, because the church is the last resort; the patient is brought here only when the patients’ condition is deemed extremely serious. Most of these healing rituals take place in the homes of the sick, some in caves and watering-holes around the mountains.

The visitor, in the iglesia, is now transported to a pre-Hispanic past imbued with elements from Catholic Christianity; and is living through a unique “Indocolonial” experience. Pre-conquest customs of the Mayans sit alongside Spanish Catholic traditions just as Coca-Cola and Pepsi bottles lie next to each other along with burning candles and chicken.

The visitor can never decipher the countless unknowns and unknowable in the scene playing out in front of him; he understands that this perhaps can never be completely understood or told; however, he tries his best to make sense of the world of the Chamula Tzotzil.

The visitor learns that the Chamula Tzotzil peoples are part of an indigenous group located in the central highlands of Chiapas. It is said that the Tzotzil-Tzeltal originated from the center of Guatemala. To avoid being subjected to the Cakchiquel (people who have inhabited the center of Guatemala), the tribe of the house of the former Zotzil stole the element of fire (1); and with fire in its possession, migrated north, from the plains of Comitan, the eastern valleys of Grijalva and what is now Los Altos; all located within the state of Chiapas (2).

The Central-American origin is clear, consistent with the cosmology from the creation myth; which states that the ultimate reason Riox (entire divinity or totality of deities) (3) created human-kind was to leave on Earth beings whose preeminent task, if not sole reason for being, was that of giving support to the heavenly gods. The history of this myth is based on “the Creator, the Maker and the Forefathers” who with one voice said (1):

Failure of human-kind to achieve this purpose was and is reason enough (within this cosmology) for coercion of people or for their suffering, or in extreme cases, extermination of various human groups. This divine purpose is called the “mandato primordial” (“primary mandate”) (4).

This principle underlies the stories of the creation and destruction of several “humanidades” (human-kind or groups or humanities). In the origin myths that appear in the Popol Vuh (1). it is said that the flesh of the first humans was made of mud, but it fell apart. In the second attempt, the human was made of wood, but it had no soul and “did not remember their Creator, their Maker.” The third time, men were made of other woods, “tzité and belfry” but neither spoke nor thought. Finally, the fourth “humanidad”, that we see around us today, was made of yellow and white corn cobs. And although this humanity was flawed and defective, since it was fickle and prone to sin; but it had all the capacity to meet the primary mandate, and also since these defects could be somewhat neutralized by way of suffering.

Thus, it is in this suffering of the sick person (patient) that the primary mandate is recalled – that the human being is not fulfilling the “mandato primordial”– that of appeasing, revering and nourishing the Gods.

Since creation or the sum-total of divinity only seeks nourishment or seeks for all things to be in compliance with the “primary mandate”, this definitely requires suitable conditions. Therefore, Riox configures the Earth and the Cosmos in order that the human can serve the “primary mandate.” First, a vertical structure is formed in this world to accommodate the hierarchies between these deities and humanity – “Cosmography” – located at the apex of Yan Vinajel (Heaven), home to the Father, “Jesus Christ – Sun”, “Virgin of Santa Maria Luna” and recently, the Virgin of Guadalupe.

Second, come the thirteen layers, between Heaven and Earth, each of which has different supernatural elements. One called Jerusalem, where lie the souls of the dead until doomsday; another layer described as un-inhabited, assuming than that this will be Hell. Other layers are characterized by all the beautiful, dangerous and forbidden that are present in the imagination of the Tzotzil, which in God’s plan are enticing traps for the ch’ulel of people who do not meet the primary mandate (4). 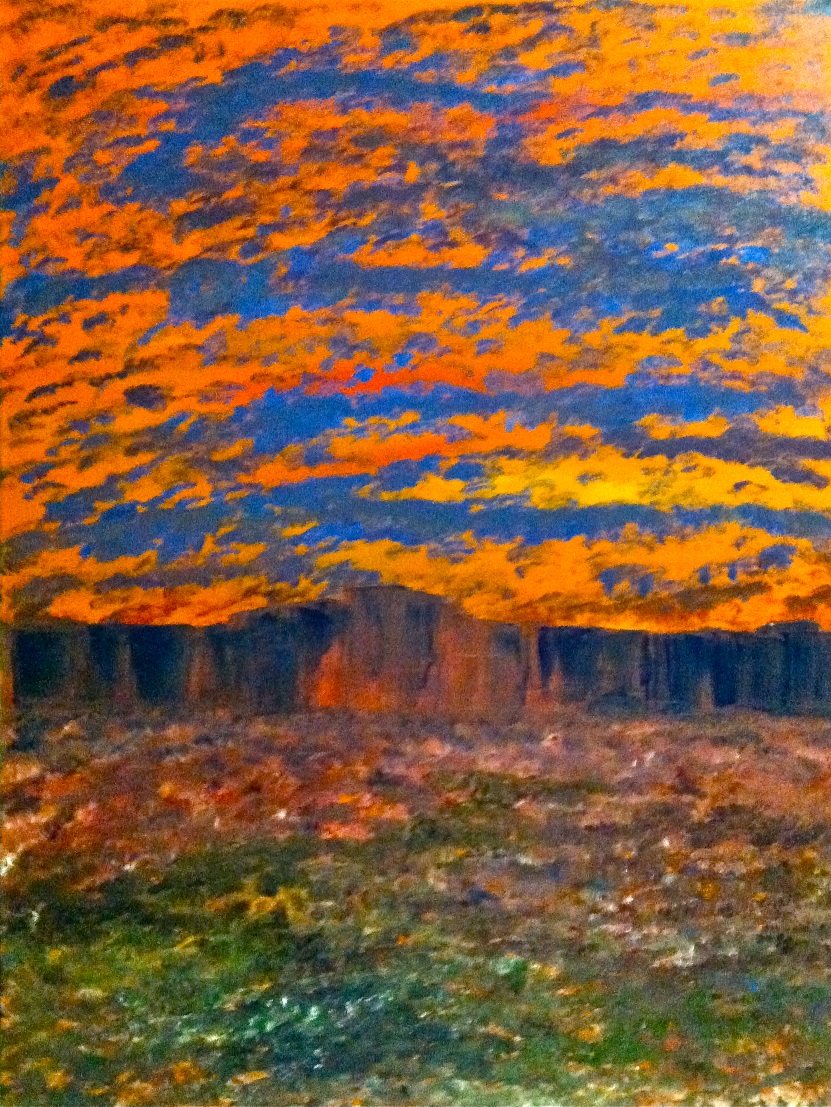 Furthermore, the secondary deities who share the surface of the Earth with humanity are split into two groups: first, the Apostles, Saints and Santos from the Catholic pantheon, residing in churches and family altars; and the second comprises the deities that inhabit the natural environment, from the pre-Hispanic pantheon, who are connected with livelihood, health and disease of humans.

The last element in the configuration of a world that exists only to fulfil the “primary mandate” is the human. The Tzotzil person, thus lives not only as a body (Bec’talil), but also as several animistic entities: C’al, which translates in Tzotzil as heat, which would be the vital energy, Ch ‘ulel that could recall the soul, Vayijelil or animal companion, which can be several, coexisting with the body, and Quibal (the capability  of transformation in a different being or natural phenomena) or present only in characters with extreme powers. Most animistic entities that make up the Tzotzil person are mobilized overnight in a space called Yan-Vinajel Yan-Balamil (Another Heaven, Another Earth).

The visitor now sees the objects on the altar at the church of San Chamula in a new light. These are offerings provided by the patient for the nourishment of Riox, knowing that the Riox draws heat from the candles, from the smell of the copal (incense), from the soft drinks, the bread, the flowers and the words spoken by the j-ilol. In his song, ‘the one who sees’ asks the divinity to forgive the faults of the sick, and restore the protection promised to him; now that the patient has made amends and agrees to comply with the “primary mandate”; The ‘one who sees’ begs for the release and return to the body of a psychic entity that has been lost or has been caught or sold by any of the secondary deities of the natural environment; by sharing it with the blood of the chicken that is destined for slaughter. And in this process occasionally sprinkles the sugarcane based liquor on the altar, “to give to the Devil, and to confuse.” With advancing appeals, the patient is palpated, to determine if the condition is getting better, and to know what other actions or spells are required for the deities speak through blood.

Thus, the visitor sees how the j-ilol (the one who sees) mediates between the divinity and the sufferer in the Church of San Chamula; helping the Tzotzil Mayans heal by redirecting them to the path of compliance with the primary mandate, and to live a life where their function is to revere and nourish the pantheon of deities and the entire divinity. And in this re-direction, the j-ilol (the one who sees) who is an intermediary between the sick and the divine  blurs the distinction between the functions of a shaman and the role of a priest.

Click here for the Spanish version of this article

Transparency and its troubling ramifications