Circa: 5th century BC (Aeschylus)

The Titans, descendants of Gaia (earth) and Uranus (sky) were powerful gods (in Greek mythology)   who ruled in the Golden Age.However, a younger set of gods – residents of Mount Olympus – led by Zeus challenged the Titans from Mount Othrys in the War of the Titans (Titanomachy) which lasted for ten years. After victory, Zeus promptly banished the Titans to the depths of Tartarus. However, Zeus spared Prometheus, son of the Titans,because he had fought valiantly on Zeus’ side against his own relatives.

Prometheus did not want to spend time in idleness, drink and food like the other gods on Mount Olympus. Prometheus (meaning Forethought) was always thinking ahead; how to make the world better and smarter.

Zeus assigned Prometheus the task of creating man from water and earth (clay). Prometheus achieved this task but in the process became fond of his own creation. Soon Prometheus saw that the humans were cold, miserable,prey to wild beasts,dying of starvation, and killing one another. His creation had become the most miserable of all living creatures in the world. This made Prometheus sad. “Fire,” thought Prometheus, was the solution to human misery; only if he could bring fire from the heavens to the humans…

Prometheus begged Zeus to give fire to the humans. Zeus did not want to share a single spark because he thought that if humans got their hands on“fire” they would become equally powerful and challenge the Gods on Olympus just like they had challenged the Titans.  Zeus said the rightful place of “fire” was on Mount Olympus so that Gods could continue to rule the world without any threat.

However, Prometheus cared more for the humans than the fury of Zeus. One night he took a stalk of fennel, went quietly into Zeus’ kingdom, and touched one end of the long reed to Zeus’ lightning bolt. The dry substance within the fennel stalk caught on fire and burned slowly. Prometheus hurried back to humans carrying with him this precious spark.Thanks to Prometheus humans got fire and warmth;they could cook food; gather around at nights to tell stories. Prometheus was named the benefactor of human kind.

However, when Zeus saw fires burning in human homes he became furious.Zeus chained Prometheus to a rock on Mount Caucasus where each day an eagle / vulture pecked out his liver which regenerated itself each night.

Prometheus suffered on that rock for years. Some say it was the betrayal by Zeus that caused him the most pain.

It Takes a Forest

Prometheus the Fox, the animals and the humans

There is a forest alongside the bank of a mighty river in a part of the world where magic realism is ubiquitous. Along the other bank stands a powerful, commercial city. The forest is beautifully diverse: tall trees, bushes, bramble, weed and reed coexist peacefully with birds, bees, animals, arthropods and other inhabitants of every color and hue. At dusk and dawn the animals congregate by the river to have their diurnal drink. They stare at the city on the other side and the name Prometheus invariably comes up.

Prometheus was a fox; one of the most intelligent beings this forest or the world had ever known. He was always thinking about how to make the world better through knowledge. He had explored the entire forest and knew everything about it. He loved the forest and the wonderfully balanced ecosystem. But what amazed Prometheus more was the inventiveness and ingenuity of humans across the river; how had these humans managed to create tall towers, factories and monuments?What had animals ever done? Except eat, sleep, reproduce and defecate?

Prometheus was fascinated by humans. He wanted to learn everything about them. So he would wait for newspapers, books, scraps of paper, anything else for that matter that came floating down the river from the human side. He would devour it (intellectually), scan it, read it, memorize it until one day Prometheus could actually understand and speak every word in the human language.

Prometheus did not have to grunt or growl anymore. He could say excuse me, watch it, take care, or I am hungry and I am angry. The more language he learned the more distanced he felt from the other animals. Prometheus thought the animals were uncouth and uncivilized and it must have showed in his behavior because one day the other animals at the watering hole just could not take it anymore. They ganged up against him: If he (Prometheus) thought he was so much more civilized than other animals then they would collectively banish him to the other side. Prometheus said he would leave happily anyway. Their banishment meant nothing. The beasts dared him to survive in the big city for a day!  Prometheus promised that he would not just survive – he would thrive among the humans.

The same night Prometheus swam across. The people walking along the banks screamed in fear when they saw this fox. After all, he was just another wild beast from the jungle. Prometheus thought speaking to them in their language would calm them down. This scared them more. They thought Prometheus was the devil. The more Prometheus explained the more terrified they became. How could an animal speak like that? Fortunately for Prometheus there was his savior on the banks that shore: a literary agent. This agent usually took his writers for a walk along the river whenever they signed a major book or movie deal. This savior agent sho0-ed the fearful people away and took Prometheus home. 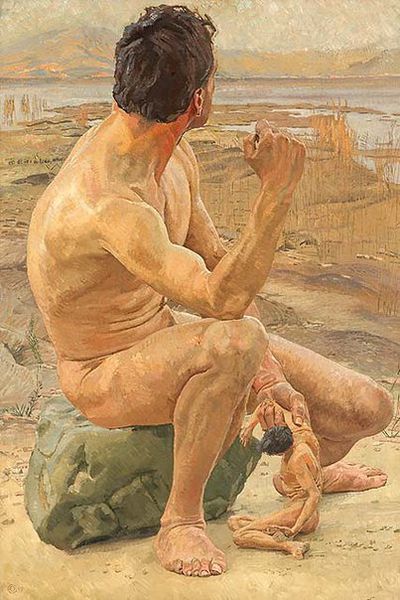 That night the literary agent heard the unique story of the fox. He was amazed and excited;he saw book signings, movie deals, speaking engagements and even lecturing appointments. Hey, maybe Prometheus the speaking fox could become Prometheus the tenured professor. Most importantly, the literary agent saw millions of dollars. Prometheus with all his knowledge could not see any of this. Prometheus just wanted to make it big among the humans – the humans that he admired. He wanted to be admired by them instead. Most importantly he wanted to show the entire forest on the other side what they had lost.

A major publishing business-house signed Prometheus as the most promising writer of the year. They gave his agent an advance and got Prometheus a computer, a library, an apartment, and everything that an intellectual needed. Prometheus jokingly said this apartment was his writing hole; he would get into his hole and come out only when the best book was written. And he was not joking about the book. In less than nine months Prometheus had laboriously punched out a million pages on his computer. The literary agent was stunned when the fox shared his work on the computer. Each page was a literary masterpiece. This fox could write better than any human. The excited agent called the publishing house and made arrangements for a billion books to be published in print in each one of the seven major languages of the world.

And as was his ritual, he took Prometheus for a celebration walk along the river bank. One question bothered Prometheus: Didn’t you say a billion copies each in seven different languages? That makes it 7 billion books in the first edition?

Isn’t that something, said the agent. This has never happened before in human history? But then you aren’t human and he laughed.

Prometheus was still puzzled: But there’s a million pages in each book and if you print 7 billion books that makes it 7 billion multiplied by 1 million sheets of papers. Where will you get all those sheets of paper from?

The literary agent casually said: You see that forest across the river. It will be gone by tomorrow. All that wood just wasted in giving shelter to some dumb beasts. We can use it to make the pages for your book – a historical landmark; the first book authored and written by an animal. It will provide new insights and knowledge for posterity. What an effective and efficient use of the forest, don’t you think?

Prometheus just stared at the forest.

That night Prometheus meticulously destroyed everything on his computer, every page and trace of his entire manuscript and said goodbye to his writing hole. By the time he swam across the river to the forest on the other side it was almost dawn. The other animals were drinking water at the river: So what brings the mighty Prometheus back here? Couldn’t thrive there, could you?

Prometheus said: It takes a forest to get me mad and angry. It also takes a forest to make me famous and successful. I would rather live with the forest and everything inside it than be rich and famous without any of it.

The animals did not understand what he said. The committee that had banished him met Prometheus at the forest-entrance and refused to take him back inside. They said they could not reverse the diktat. Prometheus explained all about the book, the publishing process, the seven billion copies, the million pages and how paper is made out of wood. But it all fell on deaf ears.Prometheus broke down crying and said I was only trying to protect all of you; but the beasts, they just would not relent.

When he tried to swim to the human side the children threw stones at him and the adults shot at him. There were posters that screamed: Prometheus the fox: Wanted Dead or Alive! The city council had given shoot to kill orders.

Prometheus realized he had nowhere to go.

No one has even seen him after that incident. However, at night, when they hear the sound of howling from somewhere along the river, they say it is Prometheus crying in pain. They say it is the betrayal of his fellow creatures that causes him the most pain.

Images and Other References

Prometheus depicted in a sculpture by Nicolas-Sébastien Adam, 1762 (Louvre)
Accessed from: http://en.wikipedia.org/wiki/File:Prometheus_Adam_Louvre_MR1745_edit_atoma.jpg

In the Western classical tradition, Prometheus became a figure who represented human striving, particularly the quest for scientific knowledge, and the risk of overreaching or unintended consequences. In particular, he was regarded in the Romantic era as embodying the lone genius whose efforts to improve human existence could also result in tragedy. Mary Shelley, for instance, gave The Modern Prometheus as the subtitle to her novel Frankenstein (1818).