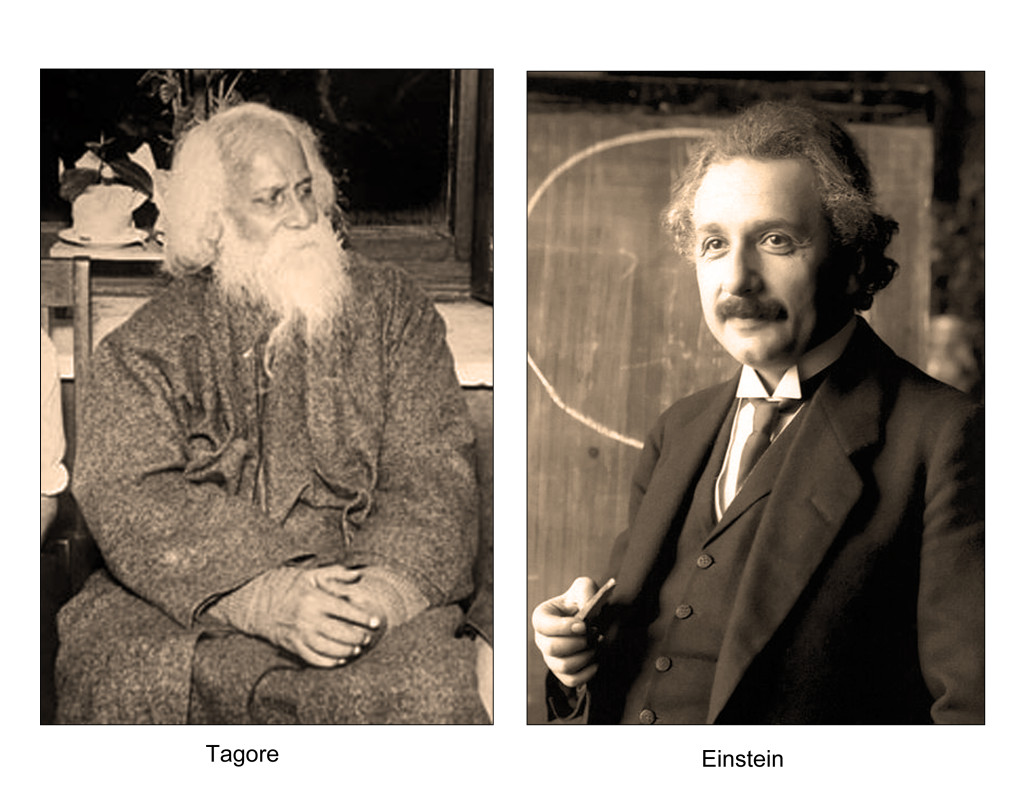 Einstein:You are a Nobel-prize winning poet. They say a poet wakes up everyday and believes as if it is a new day – a brand new start.

Tagore:I wake up everyday with the realization: I am born to die.

Einstein:Death is disappointing. It often makes people sad – and so we refuse to contemplate it.

Tagore:Death is the only certainty, said a wise woman.

Einstein: And taxes of course (Einstein laughs).  (Tagore does not)

Einstein (continues):Humans crave certainty; yet cringe from the only certainty in life – called death.

Tagore: Everything has an end including life.

Einstein:But does our birth give us nothing else but a death sentence?

Tagore:Is it not that we are also born into a life?

While death may be sentence; every life is a story.

Einstein: So what you are saying is that while we have no choice in the matter that we are all born with a sentence –a death-sentence, we have also acquired this amazing chance to create a story – a life story.

Tagore: And what is a story? Nothing but an intricate web of words,feelings,and thoughts – all strung together in a coherent and sometimes poetic way.

Einstein: A story is what the protagonist (the hero) makes out of it. According to most western traditions and dramatic canons, a story is the hero’s journey.

Tagore:The big question for each one of us is: Who will write my story?

Einstein (is quiet and pensive and then adds):What will be my story? I prefer that.

Tagore:A story has words and every story is told with words. So I ask myself: What are the words that will make my story? After all I may not have a choice about death but I do have a choice as I construct this life-story.

Einstein: You are also getting into the issue of choice here. Do I get to choose the words in my story? Brave, courageous, valiant, kind, wise,daring, bold OR fearful, desperate, angry,anxious,apprehensive,wretched, distraught…

Tagore: One can choose between nouns, adjectives and verbs.

Einstein: I prefer verbs. They are more action-oriented.

Tagore:You are a scientist. You act upon the world. Poets perhaps prefer adjectives because they want to make the world appear beautiful and wonderful or sad and wretched depending upon their frame of mind.

Einstein: However, most people choose nouns. They want things, objects. We like to acquire and hoard things. It tells the world who we are.

Tagore: More dangerously, it often tells us who we are…

Einstein: But there is more to a story than words. There are those punctuation marks – those little symbols that can create or destroy the meanings of words that are strung together.

Tagore:We often encounter a “full-stop” (period) when reading a story. That happens in life too. Doors close; roads end.  But a “full-stop” (or period) only heralds the beginning of a new sentence.

Einstein: That was the poet speaking just now. Of course there is the “comma”- my favorite because a comma signifies a pause –and a pause is much needed in our culture of speed.

Tagore: What about the “question mark”? I ask and someone responds. If humans do not respond to my asking, then nature always does. I just have to learn to listen.

Einstein:The “exclamation mark” – which is very child-like. I wonder, I am surprised, I am amazed. I use it when I look at the world but I am not stuck in it.

Tagore: Everything is new for a child and a child also often gets surprised at the same old things or is amazed by how the world works.

Tagore: And the “quotation marks”. You mark and remember the not-so-good things that other people said, and conveniently forget the good about them.

Einstein:So I have the choice of words and punctuation.

Tagore: But I have a bigger dilemma and I ask you this as a physicist and the expert on this topic: Can words become real? I have been using words as my trade for too long. I am a writer, poet, and teacher. I can no longer tell whether words are just in our minds, exist as fictitious ideas or whether they can become real.

Einstein:Yes, to the extent that I get to choose the words that will make my story; but, does that mean the reality of my life will turn out exactly the way I script it?Maybe not; mostly not. In fact reality turns out to be quite the opposite often making me wish that I was born dead. Perhaps we are “born dead” (from an energy perspective) in a way.

Tagore: The physics you have been working with tells us that reality is far beyond human perception and intuition. Are our rational minds and common sense capable of understanding the true nature of reality?

Einstein: In recent years many of us scientists have introduced some new ideas about physical properties of the universe. Newton’s physics was about the absolute-ness of time and space. But this new group, including myself, we think time and space are unified and relative. There is one absolute and that is the speed of light. Light forms a sort of bounded-ness or boundary around all we know and can know. I am working on finding that unified field theory which will tie together the workings of the physical world in one theory.

Tagore: A theory of everything?

Einstein: Sort of – you can call it that. It is tough because to us scientists there can be no contradiction built into nature, it must be in our minds.

Tagore: Does it mean that the more involved we become in writing our story, the more real it becomes. What I mean is that by becoming involved we become convinced and thereby remove the contradictions in our mind and between what we think and what we do.

Einstein:However, one can act as if the words one wrote for one’s life were real. As if they were real and act accordingly. Put up an act and sometimes the act does become fact. No, I do not mean that we will get the material things we desire. However, if I act as if I am courageous, I may end up becoming courageous. If I act as if I have integrity, maybe I will develop integrity. If I act as if I am noble, I may indeed become known as noble because my acts are noble. This has been borne out so many times by men especially during battle.

Tagore:You have inspired me. Yes, I am serving a death sentence, but how I choose to serve it is in my head and heart. I talk to myself using the words I have been taught from childhood as well as those acquired along my journey.

Einstein:How I choose to serve my sentence? That is the question that comes right along with Who will write my story? This is like the time space continuum – they are not absolute or separate – they merge into each other. They are unified and so imminent death becomes the inspiration for the good life.

Tagore: I may not be able to get the (death) sentence overturned.

Einstein:However, I will not leave any opportunity to escape. I am not willing to live trapped in a prison of fear. If I am going to endure a death sentence, I am going to do it with style (not fashion) and with dignity (not desperation).I may not escape the death sentence – but I want people to say that he tried until he died.

Tagore:I want my words (in my kind) to be my weapons in this fight and my heart to fuel the passion for the words to flow effortlessly. When I go, I want to go down fighting to escape any prison or box you force me into…Where the mind is without fear and the head is held high… I have to write those words somewhere…Ahh! Now you are turning me into a poet once again.

Einstein: But, don’t you think there seems to be too much of the “I” in our discussion? Would this matter in cultures of communality?

Tagore: What else is there other than the “I”? We may not be born alone – our mother is there sharing our pain or maybe I have a twin but I am always alone at the moment I die. I die alone. And since I have this death sentence to serve when I am born, then I alone am responsible for my life-story. 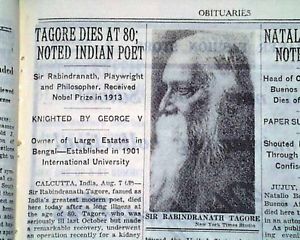 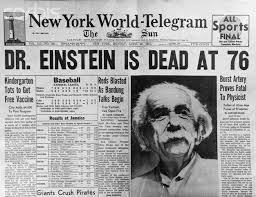 Tagore in Russia from

Tagore with grand-daughter and grand-nephew in Santiniketan 1934