“Look for yourself, the soft day Atlantic waves washing in to the pearly flat hard sand. . . .”

– Jack Kerouac from his introduction to Robert Frank’s The Americans. 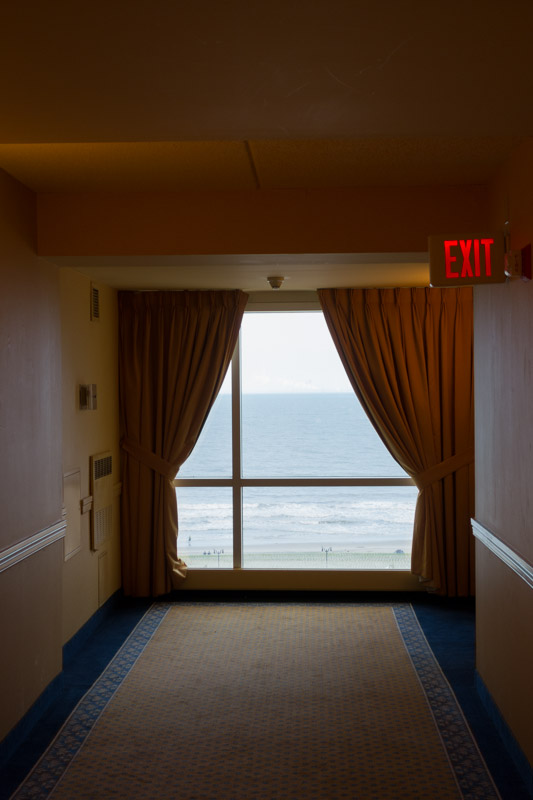 In her essay on Iceland, poet Eileen Myles implied that the rhythms of the land and seascapes of that strange and mysterious island nation somehow altered her perception of how she would thereafter approach her craft: “That would be writing. To have an up and down beside myself. To know it publicly.”

Atlantic City, New Jersey, USA, is also a saltwater place, an archipelago which derives much of its power from its geographical and socioeconomic ways of manifesting “up and down.” It’s also a “somewhere” that insists upon being known both publicly and privately. 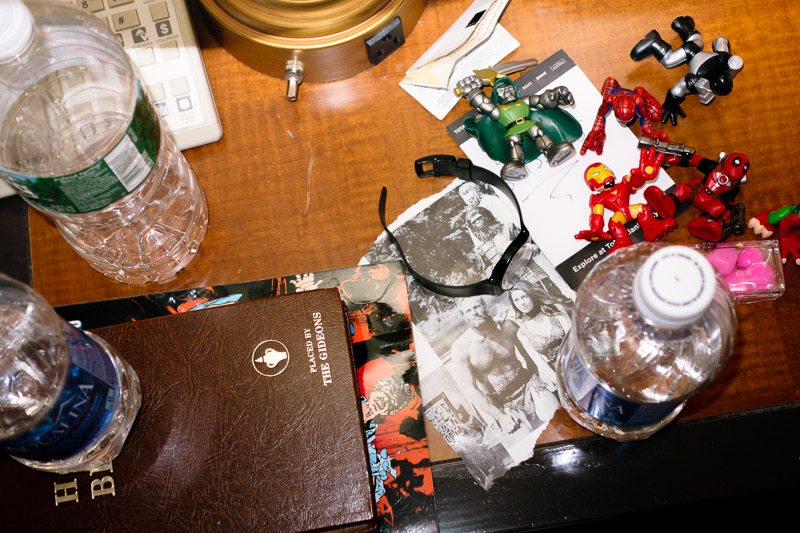 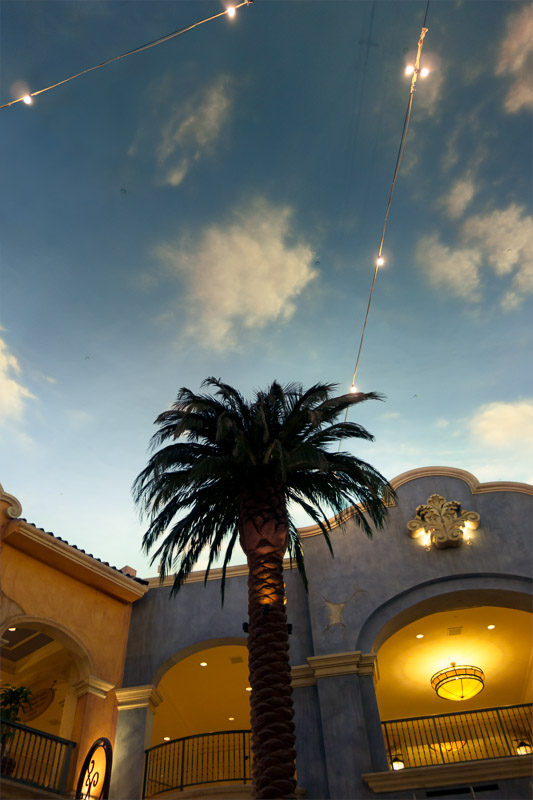 Approaching Atlantic City from inland—from the west—you get the feeling of entering a vast sculpture garden. Seen from a distance, the  casino hotels that dominate the shoreline register as monoliths. Oversized billboards announce musicals, circuses and celebrity DJ appearances.  Get a bit closer and you soon see the grit—the city’s scars, the backstreet houses, the potholed roads and cracked sidewalks, the bacteria, the swamp-boogie vibe, the dilapidated laundromats and parking lots. 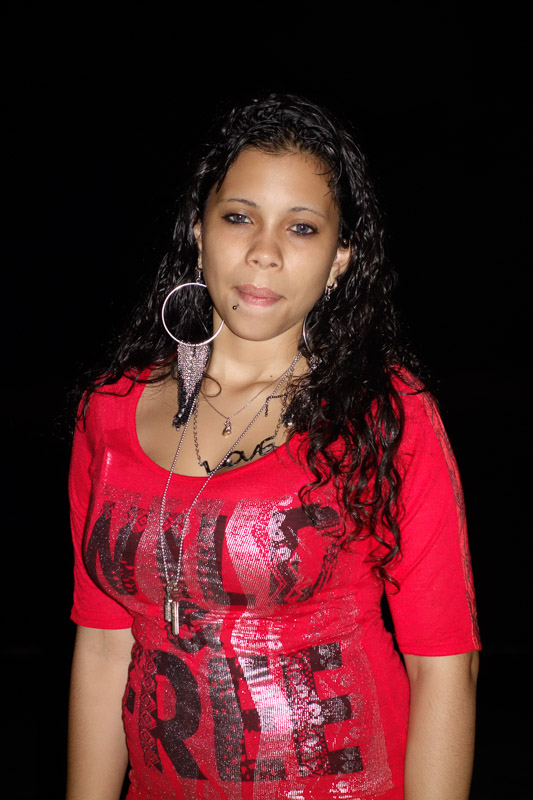 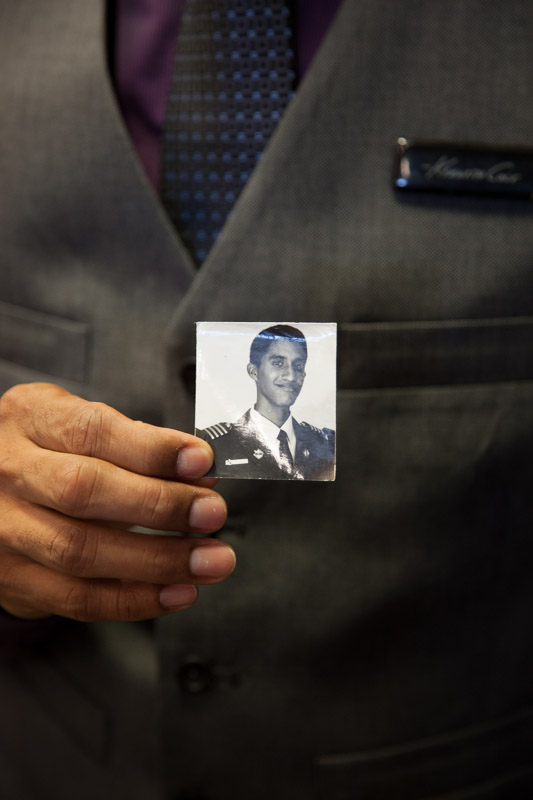 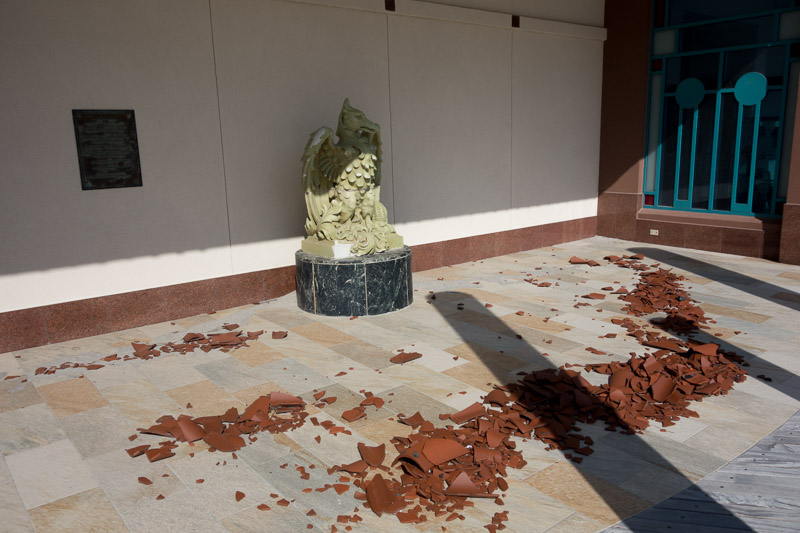 The casinos flash lights into your retina all hours ready for you to drop. Garish carpets orange and red. Coins into slot machines. Cigarette smoke. Lights on and hard and bright, and when you enter the Tropicana at 2:00 a.m. a uniformed man is there to greet you and he says, “Good morning.” Your day has just begun and life is fresh. Riverboat themes, ancient Egypt and Rome, Taj Majal. Oasis and pleasure-zone concepts explored almost half a century ago by Robert Venturi and Denise Scott-Brown in Learning from Las Vegas. Be somebody else. Risk everything. Imagine the money flowing in, a flood of money. Cash. Andy Warhol said he couldn’t be happy without it. “The minute I have it I have to spend it. And I just buy STUPID THINGS.” 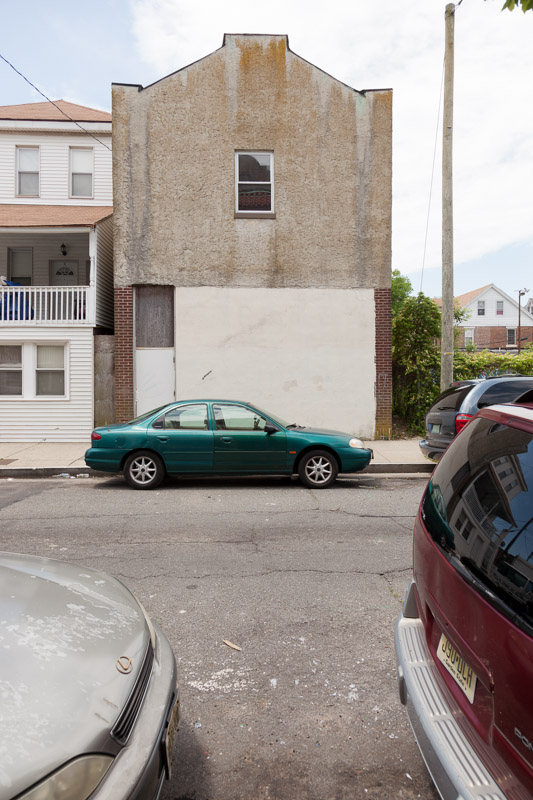 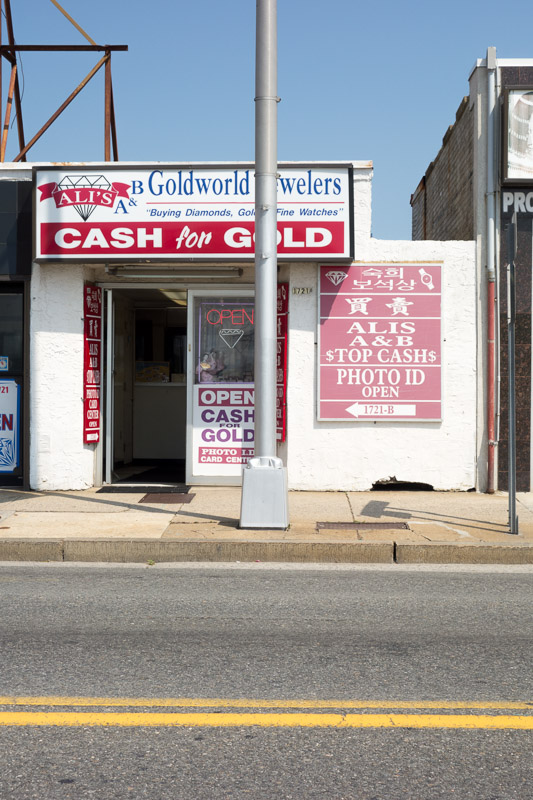 The history of humanity

Last summer, we spent an afternoon fishing with one of the guys who pushes and ferries people across the wooden boardwalks between the casinos and beach. He fishes for crabs by day, works the boardwalk at night. He told us that everything that has ever happened to any human being in the history of humanity has happened in Atlantic City. 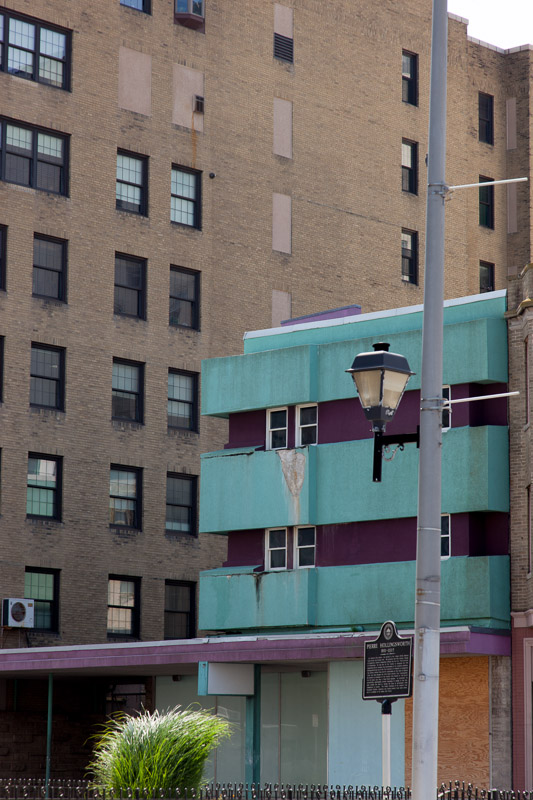 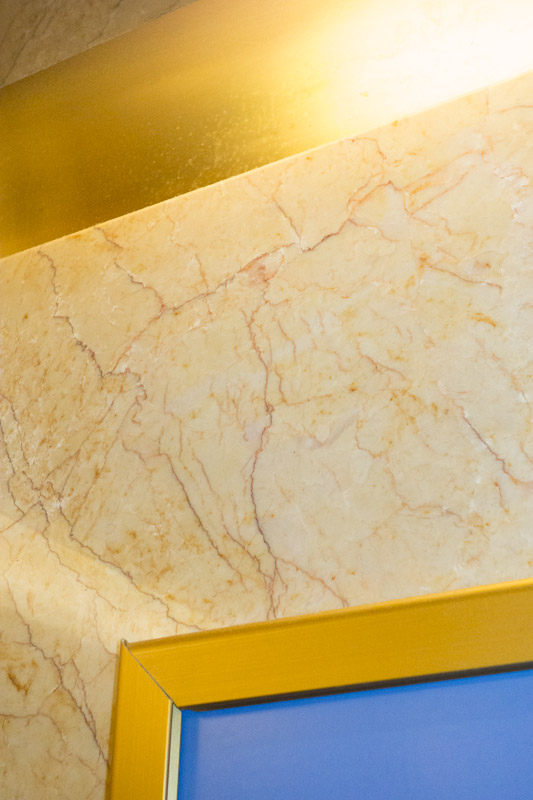 These signs hang above doors all along Pacific Avenue. It works like this. After a bad night at a casino, you go to a pawn shop and hand over your Rolex and wedding ring to a troglodyte wearing a stained undershirt, and it is 3:42 a.m. and he despises you and you despise yourself, and you thrust the wad of bills he’s given you into your pants and walk back to Trump Tower and they take it from you, quickly, mercilessly. And it’s all over. Cash is Protestant and practical. Gold is Catholic and ornamental and loaded with electric symbolism. If you possess neither cash nor gold, you are either a detached Taoist wanderer or you’re homeless. Depends on your luck. Everything depends on luck.

A New Jersey State cop told us that Atlantic City can be broken down into three distinct zones: “The beach, the casinos and the ghetto. That’s it.”

This was an oversimplification of a richer and more satisfying set of circumstances. Atlantic City may well be what Jack Kerouac described as “pure foreverhood … that big blank potential that can ray forth anything it wants from its pure store, that amazing bliss, Mattivajrakaruna the Transcendental Diamond Compassion!” Think again of golden Thai Buddhas with slender arms folded in acceptance of this chaos … The Great Mess. 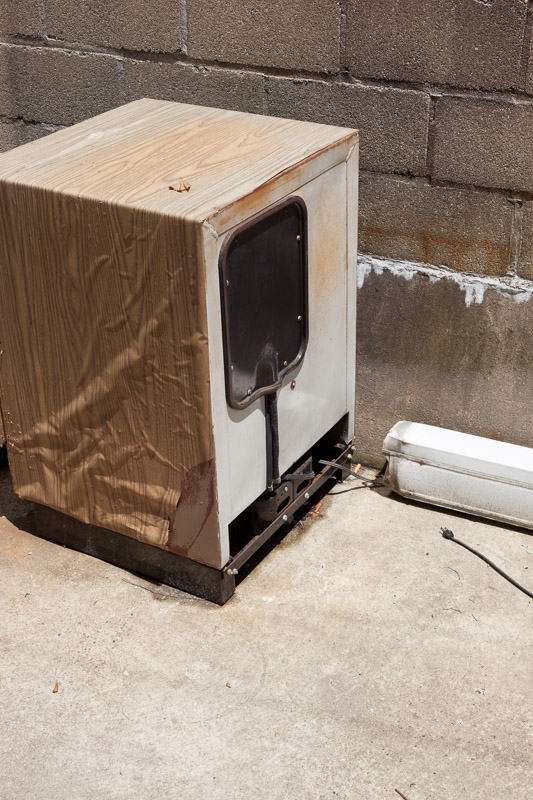 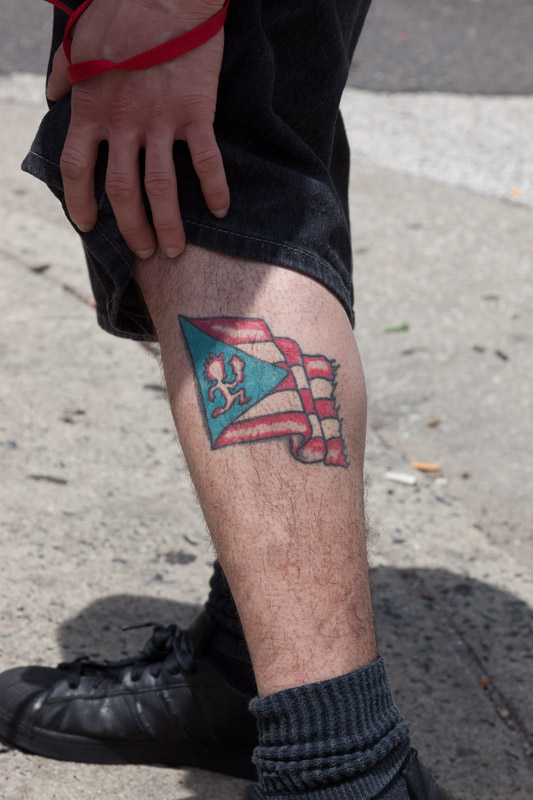 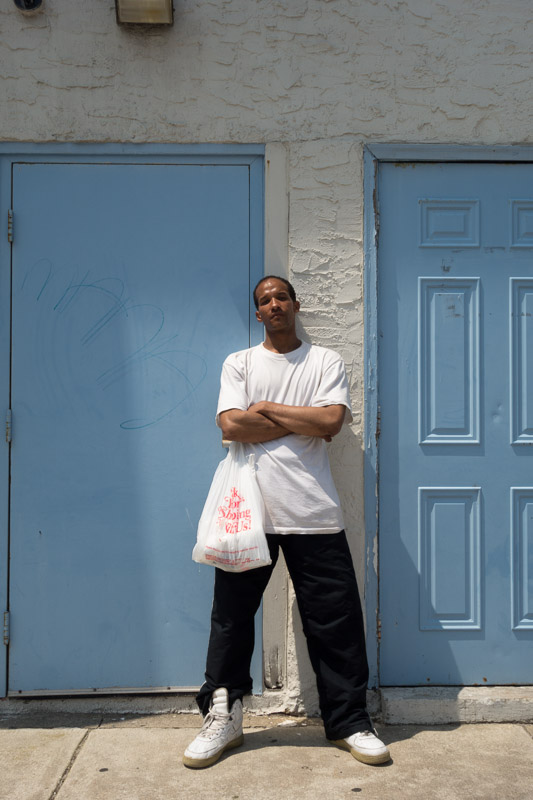 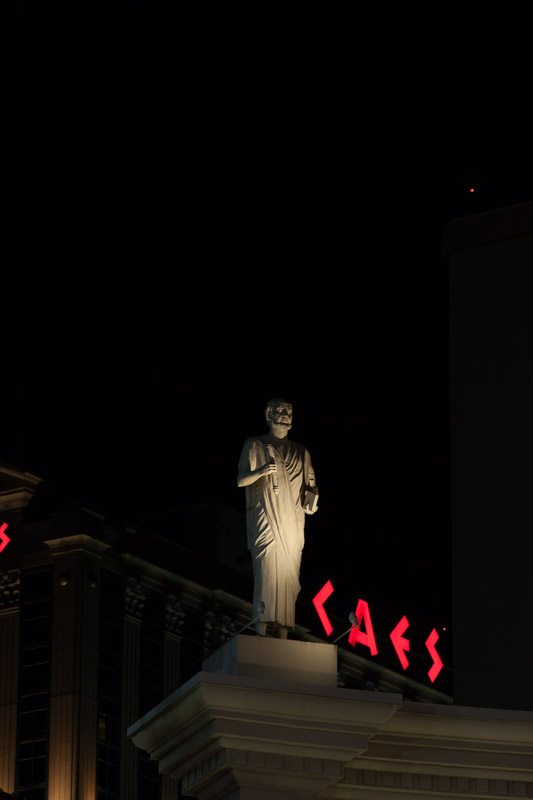 The smooth-talking and suave ex-Columbian Special Forces officer who managed a Kenneth Cole shop in an outlet mall. The Moroccan-American Sufi who was, among many other things, an expert on Noam Chomsky and Curtis Mayfield. A band of local teenage girls sandblasted by cold Atlantic winds on a cool night on the beach in the month of June. The frustrated-but-vibrant Indian immigrant who worked as a janitor in a low-end casino and realized he may have traded an old life of poverty and misery for a new one. The reform-house kid who swore that a band called Insane Clown Posse saved his life. The elegant and generous owner of a seaside bar who brought us a bottle of fine Scotch. The retired ex-cop who ran a clean and sun-filled family diner and exuded joy, confidence and good humor. The young mother in leopard print who claimed to have fed a machine 10 twenty-dollar bills within less than two minutes. The American ex-pat living in France who had come home to see how his friends and family were getting along. Another ex-cop who used to check under the boardwalks at night for drug addicts, corpses, anything. 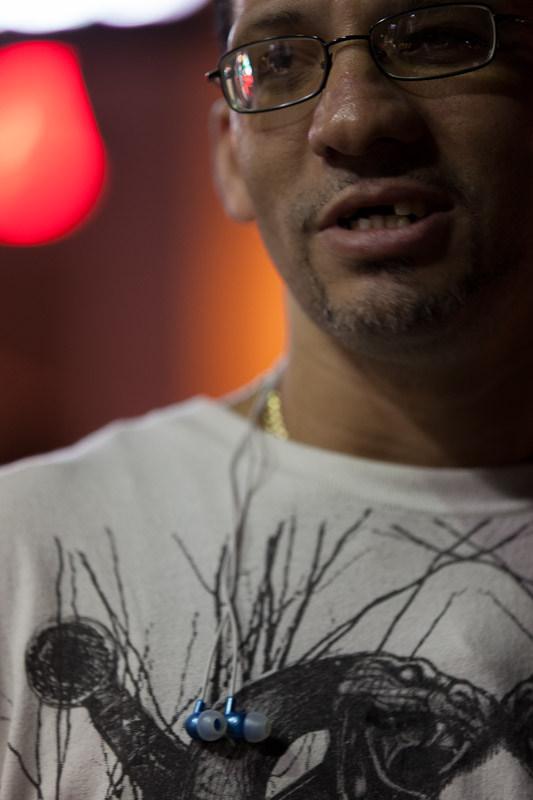 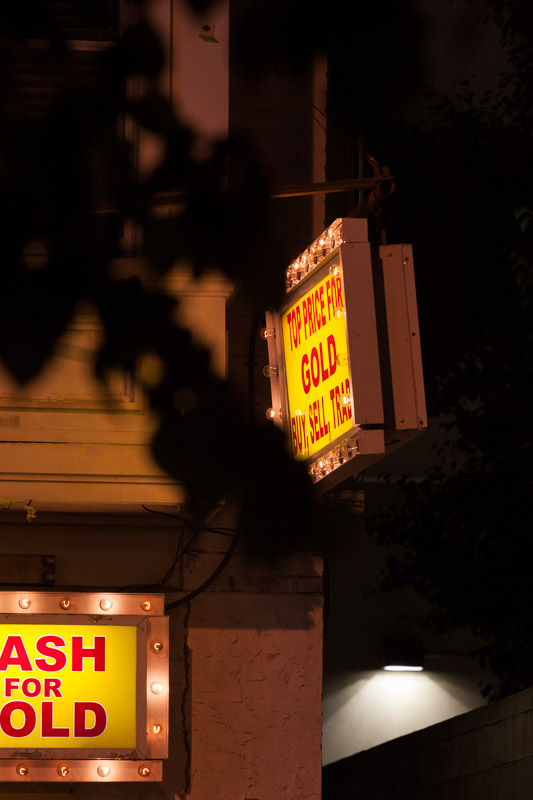 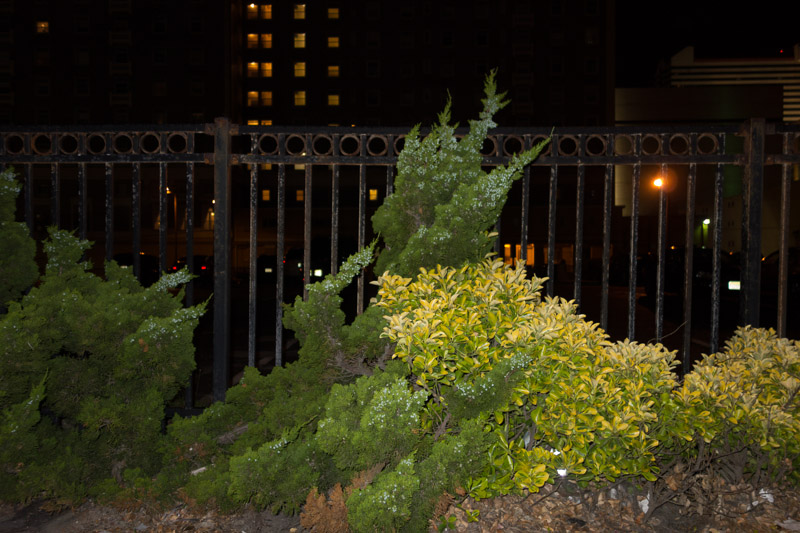 He was from Puerto Rico and wore a Cobra t-shirt. His antennae could pick up meaning and truth. We met him on a darkened back street not far from Caesar’s Palace. He walked right up to us and announced our intention without even introducing himself. Knew exactly what we were up to. Had us sized up in less time than it takes to draw a breath. “You’re making a book.” True. He told us about building the casinos, working for years installing marble in the lobbies. Said the contractors “pay you something but they don’t care about people. There isn’t enough caring around here. We could use more of that.” 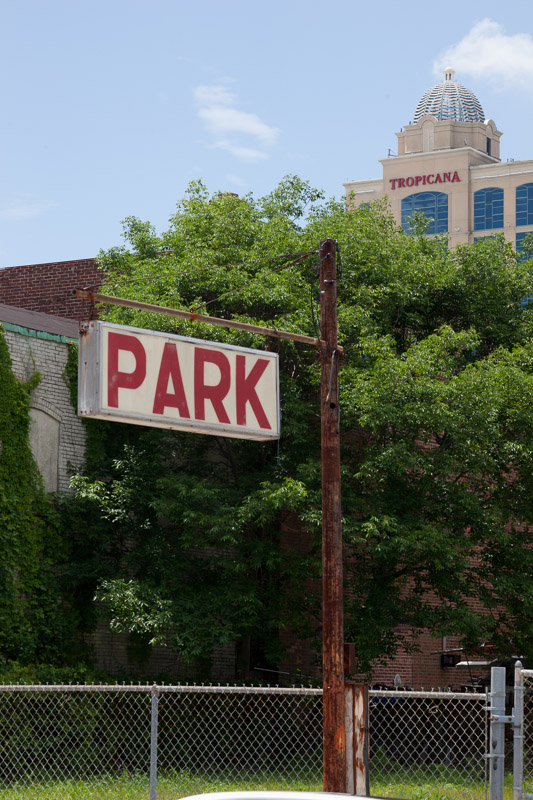 There was a guy at one of the casinos and he wore a nametag that read “Matthew” and he was a prime example of aere perennius. He had been working at the casino for decades and expected to be there for many decades to come. He was a bundle of pure unbridled optimism and he talked about the bad economy and informed us that during the Recession the casinos were doing more business than ever before. “It’s all a question of attitude,” he explained, and proceeded to quote Matthew 6:34—“Therefore do not worry about tomorrow, for tomorrow will worry about itself. Each day has enough trouble of its own.” 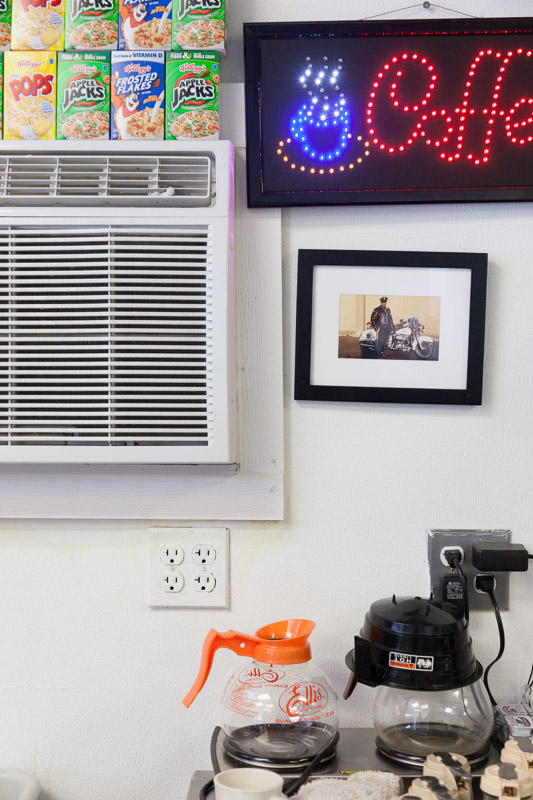 Think of AC as a microcosm of the neo-liberal, advanced-capitalist  world in which we are rapidly entombing ourselves. Think of it also as a place of magic, mystery and beauty. A place where anything can happen, and often does. Atlantic City is rife with passion, dyspepsia, petty crime, hunger, hope, utter ruin, unexpected moments of generosity, humility and grace. 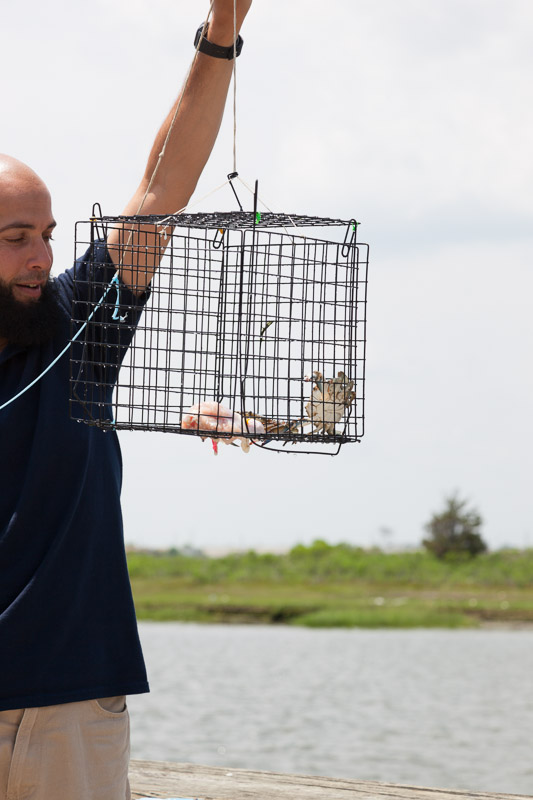 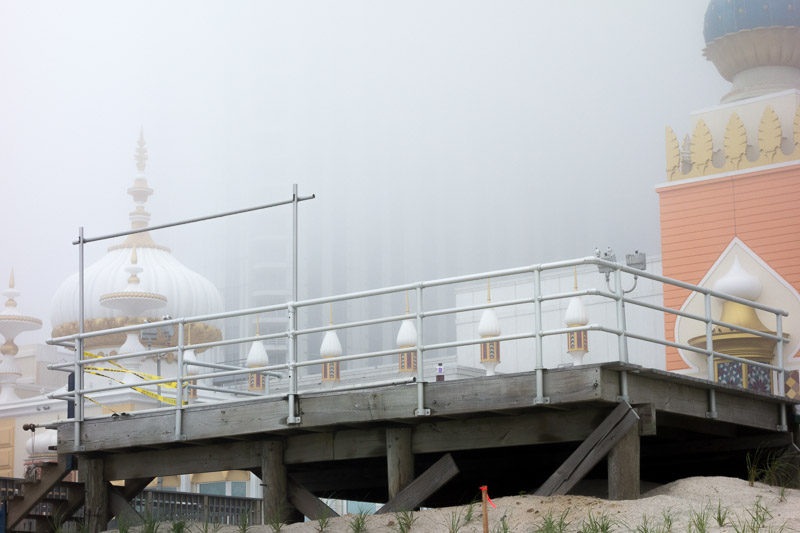 Cash for Gold is a collaborative project between Brett Davidson and Fraser Stables. The project focuses on Atlantic City in the USA, and considers relationships between material and symbolic systems of value and exchange.

Fraser Stables is a Scottish artist, based in the USA. Stables has exhibited internationally in solo and group exhibitions in Europe, Japan, Canada, and USA. He is a co-director of Atopia Projects and teaches at Smith College in the USA, He is represented by Georgia Scherman Projects in Toronto.

Originally from Houston, Texas, Brett Davidson is a poet and songwriter who lives in Switzerland. He is the author of Undertaker Please Drive Slow (Horse Law Press, 2008).  His most recent book is Glass House (Atopia Projects 2010), a meditation on the life and work of architect Philip Johnson. He also writes for and records with Captain Ludd and The Jesus Taco.