Einstein and Tagore continue imagining a better world with their continued conversations on life, human nature and human culture. 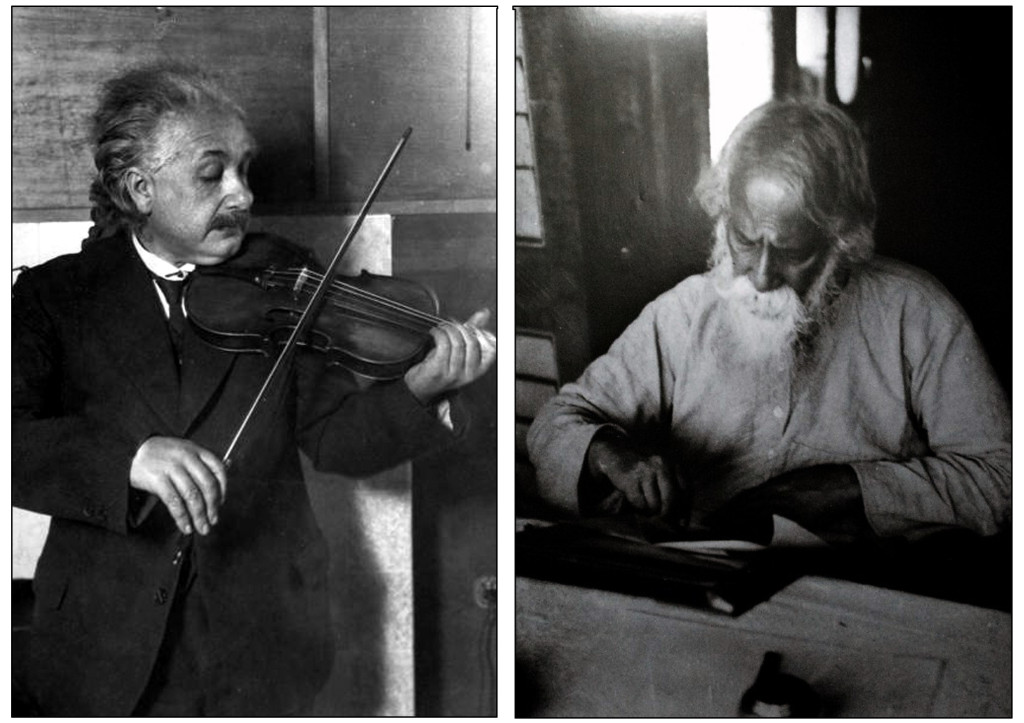 E: You are an enthusiastic global citizen and believe in the true alliance between nations.

E: Obviously you do you believe what one author has said about the East is East and West is West and never the twain shall meet…

T: In response to that comment of the west and east never being able to meet, I had written to many fellow thinkers in the West. I believe in the true meeting of the East and the West.

T: Absolutely! I think nationalism poses a danger for all of us. At the same time globalization can also be equally dangerous if one does not think it through and does not pay attention to the needs of people. Nothing would give me greater happiness than to see the people of the West and the East march in a common crusade against all that which robs the human spirit of its significance.

E: You believe there is something common underlying the western and eastern: the human spirit. What about human nature?  There is this world that man has created – the world in which we have technology, art and music and all of this comes under the umbrella of culture. But there is also this part of the human that Nature has created or that which comes under the mechanisms of nature?

T: By plucking the petals of a flower, one does not gather the flower’s beauty or smell. The methods that Man uses to understand the world is one of analysis – Man breaks things into parts; looks at the parts and then thinks he understands everything.

E: Reality is merely an illusion, albeit a very persistent one. Man has created an idea of the world based on his senses and sensibilities. These senses may be limited and have inherent limitations.

T: And man may be getting a very limited view of the world.

E: Compare just one Man’s senses such as his eyes and his ability to see colour compared to other animals which see their world in black and white or grey. So what are the true colours of the world?

T: I am also amazed by Man’s taste buds and his indulgence of those taste buds. Man cooks the food he finds and also adds spices. I do not think any other animal cooks food or adds spices to food.

E: Much of eastern food has have taken spices to another level. To me the eastern kitchen is like the palette of a painter. The way perhaps an eastern cook mixes spices is almost the same way a painter mixes colours. The taste of the food item often changes completely because of the spices.

T: If one has to characterize the east, especially India, one need only look at its kitchens and the jars of spices. With the use of spices the eastern kitchen challenges what Nature has given us. It takes a bland food item and makes it palatable to the senses.

E: However, it is these very spices that also led to our downfall. The entire colonization of the East started with the quest for spices because there was such a huge demand for spices and it is said that in the 1600s traders made profits of more than 400 to 4000 percent on spice sales. Spicing food was an expensive act. Talking of wealth, it is said that the paces and wealth of Genoa and Venice were made on the spice trade. So was the grandeur of Lisbon and Amsterdam. And their wealth inspired other kingdoms and countries to follow in that same economic activity of sending ships and armies to conquer and plunder.

E: In fact it is also noted by some historians that at one point in time the cost of the spice exceeded that of the food on which it was being used.

T: I did not know that. You mean to say that if I were putting spices on lamb or fish, the cost of the spice that I used was much higher than that of the actual fish or lamb.

E: Exactly. And especially pepper, they say, was in demand. The European sea-traders faced a lot of dangers in getting the spices form the east to Europe – pirates, plunderers, bad weather, storms, damage to the commodity and so on.

T: What Man will do (or will not do) for that little bit of taste in food? For the taste buds on his tongue?

E: And also the destruction that this indulgence in taste wrought upon this world. It was also about money of course. These traders were also ruthless in the way they went about acquiring these spices from the eastern countries. Slaves harvested and often rowed the boats that carried the spice cargo. People were cheated of their lands. The entire thing was essentially about economic greed.

T: Man is attached to his senses and these senses dictate Man’s view of the world. Man indulges the sense as this brings him closer to pleasure. The world of Man is created on man’s indulgence of his senses. The satisfaction of these senses then shapes man’s values.

E: In that case the world of Nature is based on nature’s values?

T: What are nature’s values? That is what Man has to understand. Man may impose some great values on Nature but these are again Man’s values. I think poets like me do that. We often impose our values on nature and other objects.

E: Mr Darwin gives us some insights into the values of Nature when he talks about the struggle for existence as being a hallmark of nature in his book The Origin of the Species. However, Mr. Darwin says that despite this struggle for existence there is a complex set of checks and relations of all plants and animals to each other. He cites the example of a barren heath and a similar heath with plantation of the Scotch fir tree. The plantation shows multiple varieties of plants which lead to an increase in the variety of insects and this leads to an increase in varieties of birds that feed on these insects; each one balancing the other.

T: From what little we know – we can say that Nature’s world is created on BALANCE and man’s world created on “imbalance.” Indulging in senses and wanting more pleasure or gratification leads to this imbalance. Man gets something, likes it or makes profit from it and then he wants more. Nature tries to curtail that inherent greed with checks and balances.

E: Nature has created her world based on her sensibilities which are obviously based on checks and balances. Mr Darwin goes on to talk about predators – animals from another species that are dangerous and life-threatening to one species.

T: In the case of man there do not seem to be predators? Man seems to have killed all possible predators such as lions or tigers or bears or driven them far inside the forests and woods.

E: Except of course tiny germs and viruses that seem to be plaguing Man. Remember the 1917 flu pandemic that killed millions across the world.

T: Of course. However, based on Mr. Darwin’s categorization of predators and competitors or rivals, Man seems to have more rivals.

E: Why not see the entire human species as categorized into some predators and some rivals. Maybe man has become a predator towards other men?

T: This is what has happened with colonization. Some countries have dominated and subjected others to severe oppression – taking their lands and farms and mines and utilizing it for the gain of the west.

E: The entire west or a select few. I daresay that a select few in the west have benefited from this oppression.

T: I agree. The poor everywhere are in chains.  However, further to the observation you made about our predators and competitors being amongst us humans, we may have fallen into the trap that has been laid for us by those who compare human social life to nature’s biological realities.

T: Well if we argue for a second that human society is about a struggle for existence just like the natural world, then we are saying that it is okay for some of us to eat up the others because some us are lions and the other are gazelle or deer.

E: I see where you are going with that argument. You are saying that human social life is supposed to be human. And the HUMAN is different from that picture of nature’s struggle for existence that is drawn by many scientists. Furthermore, men routinely destroy other men by waging wars against them – sometimes the wars are economic wars. But when have we seen a group of lions waging wars against other loons or oppressing them economically?

E: I have heard many such people who compare human social life to their idea of the harsh realities of nature. They stand in board rooms of companies and classrooms and colleges and show pictures of the lions and deer in Africa. They say we are the deer and every morning we wake up we have to run faster than the lion so that we are not eaten up in this fierce competition of modern life.

T: Do you think people actually believe them?

T: But I do not buy this analogy at all?

T: Well, show me one lion who owns a refrigerator. And one deer that has purchased life insurance or pays regular premiums for medical insurance. And if you can show me that, I will buy this argument that we have to outrun each other to save ourselves. The whole idea of the human being is to protect each other – care for each other.

E (laughs): So, it is about Man’s greed then as I argued earlier that has led to the downfall of man. Man’s indulgence in his senses that has led to this current state of the world. If lion’s were to buy refrigerators, I wonder what would happen to all the animals on the Savannah. And if the deer were to buy life insurance then…(laughs)…I can barely imagine…

T: The lion or the deer respect Nature’s laws and values and live by it.

E: Man does not. He tries to get anything he wants and then after he gets some of it, Man tries to hoard and get more of it. Man wants to control everything. And if Man does not get what he wants through straightforward means he uses all types of power – brute force, lying, cheating, deception – to get what he wants. Man overrides and disrespects all checks and relations that Mr Darwin points out as existing in Nature.

T: It seems that Nature’s world and Man’s world is very different indeed.

T: I had indeed disagreed with Mr. Kipling’s statement (never the east and west shall meet) and said he represents the group that wants to keep man away from man. But that was about man and man. This is about nature and man. I do want nature and man to meet – that is the essence of my poetry but I am disheartened by what I see around me.

E: Can Nature and Man ever meet and find common ground. Or will Man always fight against Nature?

T: Man can try to be like nature. Can a part behave like the whole of which it is a part? It should, right?

E: In this case the part has broken away from the whole? Man seems to have contradicted his own Nature.

Darwin Charles. Natural Selection from The Origin of the Species. 1859.