Story 1: Who will bell the cat?

Also titled: Belling the Cat or Mice in Council

Circa: Middle Ages (also attributed to Aesop, Greece, 500 BC)

search of food. The food stocks in the mice-holes dwindled and the entire colony was facing starvation. Being a democratic colony, the mice arranged a town-meeting to generate a solution to this problem. By a process of voting and secret ballot the group arrived at the decision that a bell should be placed around the cat’s neck. This would ensure that the mice heard the cat’s arrival from a distance. This forewarning would help the mice to escape with limbs and life intact and maybe some food. The resolution was passed unanimously and the mice congratulated each other and rejoiced for the rest of the day until it was night-time again and everyone as hungry. That’s when an older mouse raised the question: Who among them was going to be the one to bell the cat? The mice dispersed quietly and quickly.

Story 2: Who will bell the FAT Cats?

Once upon our time there was the 99 percent that lived on Planet Mice. And then there was the 1 percent. This 1% had all the FAT Cats in it. The 1% owned all the wealth, property, incomes, banks and islands and controlled Planet Mice. On top of their fat wallets the Fat Cats also had the governments of various countries in their pockets. Not only did the Fat Cats own more wealth than the rest of the 99%, they essentially owned the 99%.

However, the 99% believed they were free.

Because they periodically voted and made consumer choices – which President to choose was an option no different from which cheese to buy – and along with their belief in freedom they were also sold the idea by various authors of mice-help books that they had the power to change the world!

The mice freely drove their oil-guzzling cars, made outrageous choices in the malls, and browsed the world-wide web until a recession hit that planet sometime between 2007 and 2008. Most of the young mice in the 99% were pushed into unemployment. However, they woke up from their social media induced slumber and cell-phone caused coma a full three years later – in the middle of 2011; probably after the credit card bills racked up and they could not order cheese pizzas anymore.

Some among the 99% became indignant.

They got together, just like the mice did in the fable, on town squares in Spain screaming: We are the 99%. 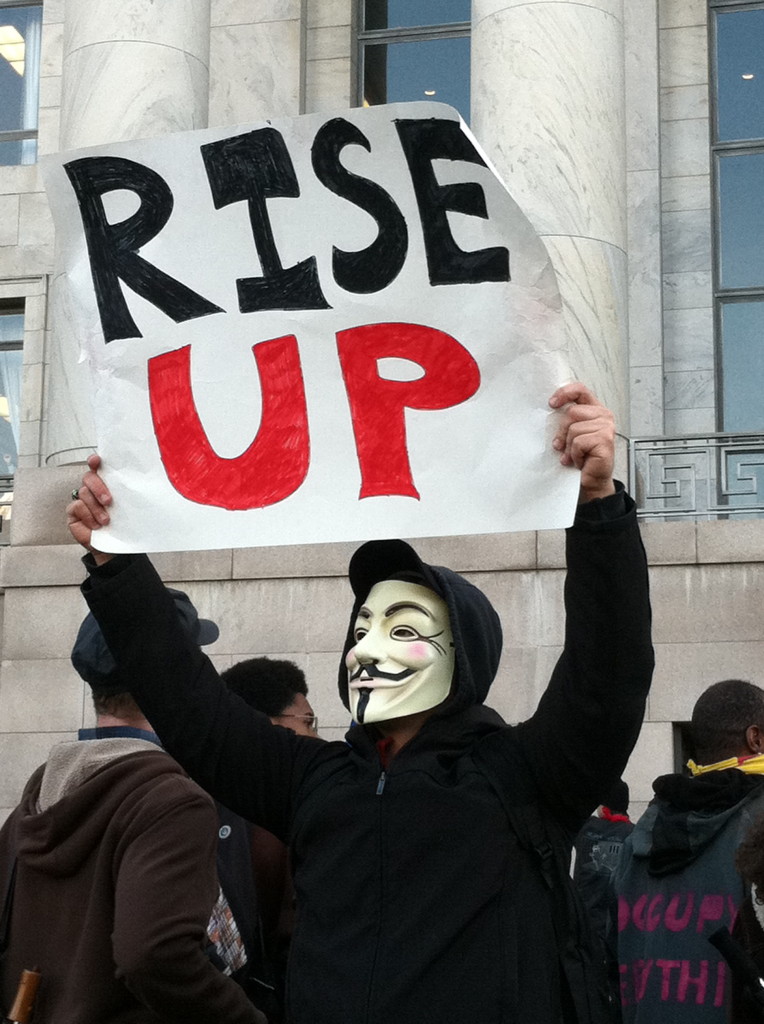 When asked why the anger, the youth looked around for an answer and someone not very young said: Because we are not in the 1%. And with renewed vigour the youth continued to shout: We are the 99% because we are not the 1%. We are mice because we are not Fat Cats.  The screaming spread across the world to parks and to walled streets in New York. Ironically the jobless youth went on a rampage of occupation: Occupy our colonies they said. The fat cats have taken everything from us.

The 99% camped non-violently in front of the Fat Cats’ offices; shouted slogans and posted images on social media: “Someone please put a bell around the neck of the irresponsible Fat Cats.”

When asked: Who will bell the cat? The 99% smartly replied: We have read our fables. Of course our governments, they said. We are not stupid like the mice in the fable.

The 99% somehow believed their politicians would rein in their bankers while their governments were already in the pockets on the Fat Cats. And without losing a beat the politicians said: Let us talk to the Fat Cats and see what we can do?

The Fat Cats said: “Of course we want a bell around our necks, but don’t we have to follow due process? We live in a civilized society, don’t we? We may own 99% of the planet, but it’s all legitimate, isn’t it?”

So the 1% asked the 99% to make a simple and short list of demands: “Arrive at a consensus and tell us one or two things we can do.” Of course the 1% knew that the 99% could never agree on a common list of demands. It was Babel all over again.

Then they asked the 99% to nominate a spokesperson; after all even though Fat-Cats were only 1%, they could not speak to everyone in the 99%, could they? We can speak to one spokes-mouse, the Fat-Cats said. Of course the Fat Cats knew there would be quite a few spokes-mice wanting to squeak for the 99%. And very easily the Fat Cats played one spokes-mouse against the other during the wine and cheese town-meetings.

The Fat Cats also contacted their pet journalists and house-trained academics. The Fat Cats asked the journalists to write scathing analysis of how the 99% movement was fundamentally a violent one; it would create unimaginable anarchy and disrupt the peaceful social fabric of Planet Mice. The governments cited these paid news articles and set the government forces loose on the protestors.

Academics were funded to write how Fat Cats fulfilled a critical function in society; why Fat Cats were necessary for the survival of the planet. And of course the academics published as if there was no tomorrow, as if the academic would perish if (s)he did not publish. They created the Fat Cat theory of evolution; the Big Fat-Cat Bang theory of the origin of the universe and the Fat-Cat theory of Everything… And to add the spicy topping on the cake, the academic guru of the young protestors dismissed the entire movement. He said protest was futile because the 99% had no objectives. The 99 percent’s non-violent request for equitable distribution of wealth was both ineffective and inefficient. How could equitable distribution ever be objective?

The intellectuals on Planet Mice had sold their souls to the Fat Cats. Imagine Thoreau, Gandhi and Dr. King saying: Non-violent protest is futile. Civil disobedience has no objective.

The 99% squeaked and quickly dispersed into their social media networks.

The 1% continues to rule the planet… with no bells and no whistle-blowers!

“Trouble with mice is you always kill ‘em. ”

“Nonviolent theorist Gene Sharp’s work was reported to have influenced the nonviolent struggle movements in Serbia and the Arab Spring. US Occupy camps organized study groups discussing Sharp’s 198 methods of nonviolent action. A subsequent film about his work premiered in Boston, and was screened in Occupy camps across the US and Europe. However, Sharp warned that many of the tactics the movement were employing were not effective. In an Al Jazeera interview Sharp is supposed to have said, “The [Occupy] protesters don’t have a clear objective, something they can actually achieve. If they think they will change the economic system by simply staying in a particular location, then they are likely to be very disappointed. Protest alone accomplishes very little.”