“Lovin” up on my Bike

This is a story of how I ended my relationship with the automobile and revisited my love affair with a bicycle. Although I have ridden bicycles for their pure utilitarian application — in college, and when I lived in various resort towns — my primary obsession with the bicycle was formed through recreation and competition. Admittedly, I thought that this was a shallow relationship, but over the years it started to show signs of depth. And now that we’re both a bit older, our relationship has grown into something more authentic. 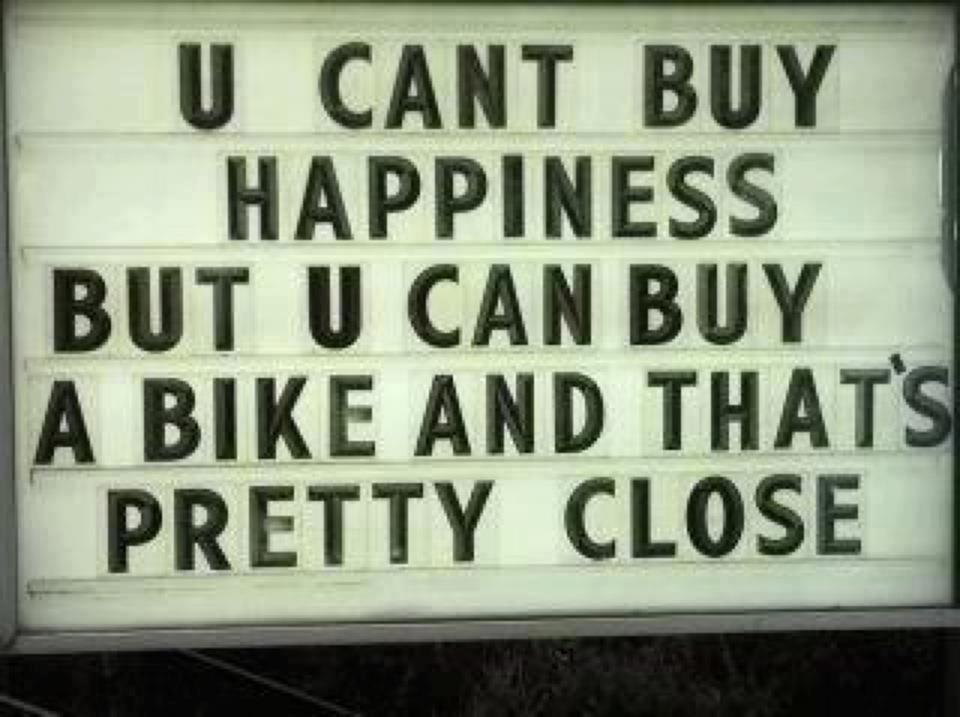 The Great Big Bike Lane
When I decided to challenge America’s automobile obsession I was living in the center of America’s quintessential motor metropolis, Los Angeles (L.A.), California. A metropolitan area of over ten million, L.A. is statistically the worst city in the United States for gridlock and among the ten worst places for automobile traffic on the globe. Depending on which report you read, commuters experience between 64 and 100 hours of traffic delays annually.

Although I only drove a steel coffin (automobile) briefly, I had horrendous experiences with daily traffic. Most of my travels were in the Valley (San Bernardino Valley) traveling from 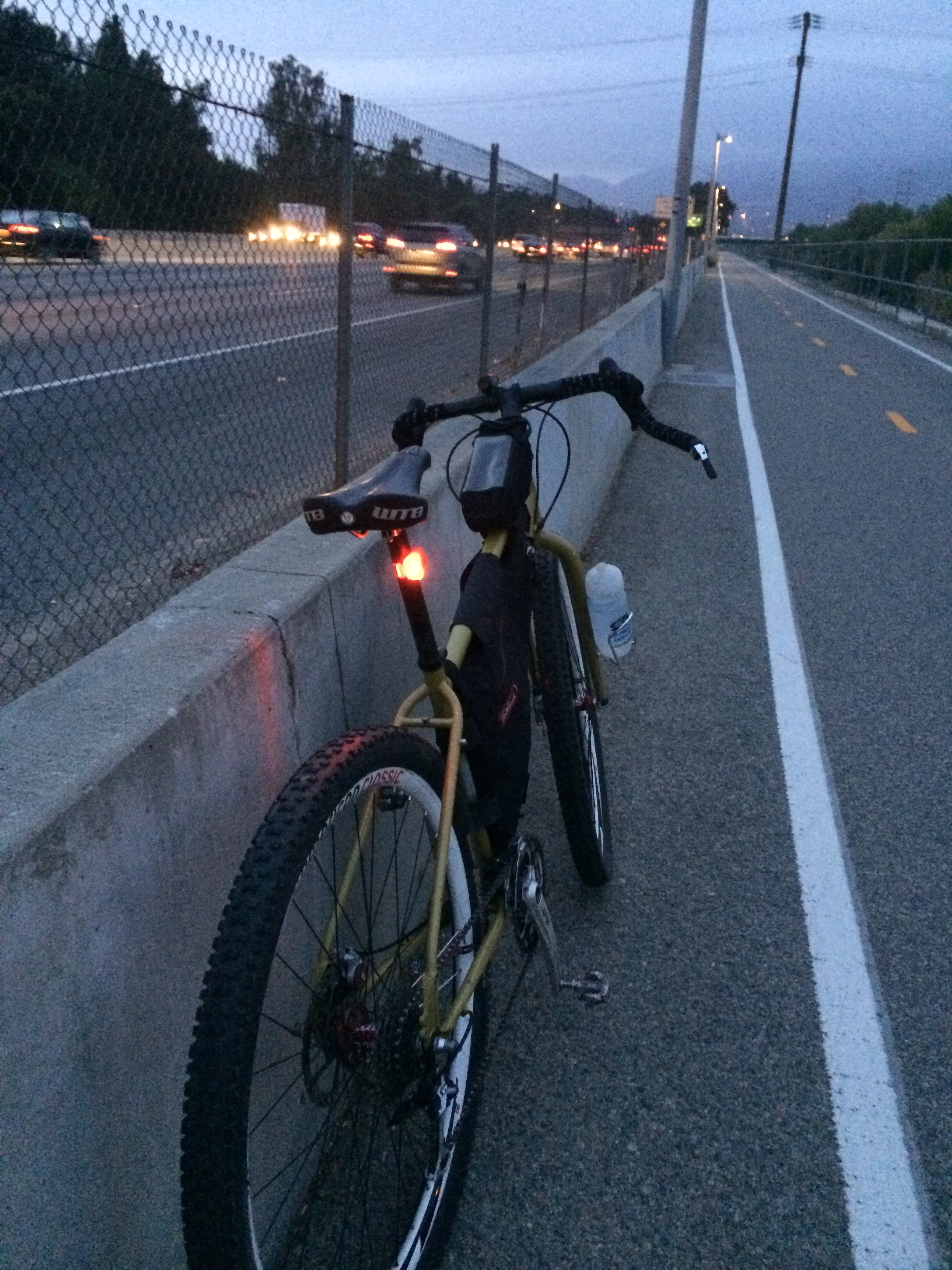 Glendale to Altadena, Burbank, Eagle Rock, Silver Lake and Hollywood but immediately I was perplexed to as how long it took to travel a few miles. Interesting enough when traffic was backed up, I often made better times on my bicycle. Therefore, I reasoned if I surrender my car, traveling by bike wouldn’t be all that problematic.

I called the American Fargo Union (Bank) and asked at which branch do I drop the car off? They placed me on hold; and twenty minutes later a customer service manager explained it didn’t work like that. I had to continue to hold on to the car until I had defaulted on my loan. It wasn’t until after I default that they would send an “agent” to retrieve (repossess) the car.

Two months later, around 3:30 am on a Monday morning I heard a wrecking truck in the alley behind my Burbank flat. This didn’t alarm me since I had already told them where they would find the vehicle. I was expecting them earlier, but nevertheless I was glad they showed. The young dudes, who had come to repossess my car, looked a little rough around the edges, and when I came out into the alley to take a final look at my car, I startled them with my presence. The one who was verifying the VIN# dropped his flashlight. I walked around the steel coffin once; I signed some paperwork; and the car disappeared into the opaque night.

I had surrendered my car to the repo man, and the strangeness about this action is that I immediately felt liberated from the burden I had been living with. Since my career imploded and my finances went south, the once modest utilitarian vehicle morphed into an unnecessary consumer fetish. The end was near and I knew it. To try to hold on to the car would have been absurd. The car had to go just as quickly as my income did a few months prior. What’s more, except for trips to the grocery store I was rarely using it.

The bank and repo man gave me exactly the nudge that I needed. And even though, I’ve been a bicycle nerd for approximately forty years, this turned out to be a different undertaking entirely; I’ve entered a completely new genre of bike-riders. I ride slower much of the time, I no longer wear Spandex and my bicycle is much heavier. I’ve now become one of those old dudes that I use to speed by on my lightweight race bikes when I was a kid. Their bikes where usually outfitted with racks, panniers, leather Brooks saddles and they were spinning out on high touring gears. Some wore business suits but most often they wore cumbersome first generation Bell helmets and bright orange safety vests. Although English hand-made saddles have become fashionable again, the commuter aesthetic has fortunately changed immensely since the 1970’s.
While I do believe that bicycles are one solution to our many transportation problems, I am not advocating for everyone to ditch their automobiles (although I still argue “cars are coffins”). In some places and instances automobiles may be useful. However, I do believe that there are some places in the United States and around the globe that petroleum powered automobiles are likely to become relics of the past. In casual observations, it also seems that young people in particular are abandoning the automobile even in cities like Los Angeles.

While my original intent was to ride in Los Angeles for a year, I wasn’t certain that I would survive the project. I was riding in excess of 200 miles a week and each day I would have multiple incidents where a vehicle would nearly collide with me. Although L.A. has a strong initiative to create more bike lanes and host a very successful Bike to Work Week, there is huge resistance to a bike friendly infrastructure.

Los Angelina’s love their automobiles and many are unwilling to give up any portion of public roads for bikes. Several cyclists claim there has been a reactionary response to increased bike lanes and bikes are viewed as an element contributing to worst traffic. I too have had cars swerve into me in the bike lanes and speed up on my rear as I try to make a left hand turn, but the most common thing that motorist do is squeeze you out of the lane.

One of the times this happened, was while I was sharing a pace line with another rider.  An aggressive driver nearly hit the other rider and it nearly turned into a physical altercation.  The driver scurried out of his car and the cyclist was off his bike. Seeing the twitch in the driver’s eye, I immediately yelled THINK! The consequences would have been high and the older driver was clearly outmatched. A violent confrontation wouldn’t benefit anyone.

Unfortunately many motorists don’t realize their multi-ton vehicles can be catastrophic for any rider. Yet over the years I have been in situations where people have used their cars as weapons. Once I was run into a ditch off the road when a car gave me a “right hook” (the act of taking away a cyclist’s right away when making a right hand turn). I’ve been hit three times by cars over the years and had a gun drawn on me in one incident. Once I survived relatively unscathed, but twice I had to visit the emergency room. Motorists of this type either want to disconcert riders or they literally want to cause bodily injury. 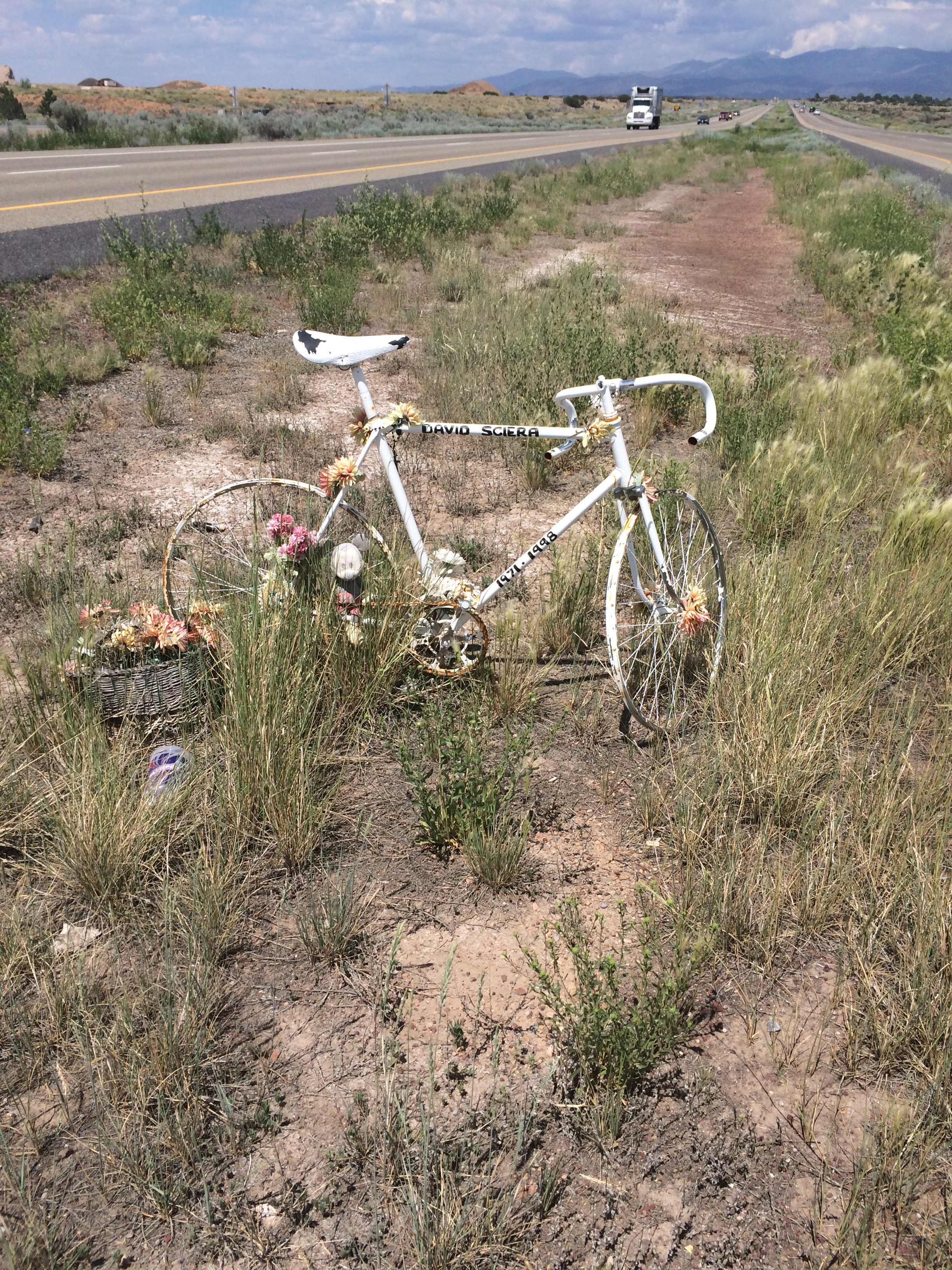 In addition to having near misses everyday, I was reminded of those dangers by seeing Ghost Bikes on my daily routes. Ghost Bikes are bicycles along the road painted white, usually locked to a street post and a little plague is installed with information of the fallen cyclist. Ghost Bikes initially started in St. Louis, Missouri and in 2012 there were reportedly over 630 Ghost bikes around the globe. Since 2012 accurate data hasn’t been taken.

I’ve seen Ghost Bikes in several major cities, but I didn’t pay much attention to them until I
saw them in high frequency in Southern California. I’ve seen ghost bikes in other cities, but the sight of so many on my daily rides, had a chilling effect.

In 2014 the Los Angeles Times reported on a recent study by the Governor’s Highway Association. According to the article, “If you are going to be killed by a car while riding a bicycle, there’s a good chance you are male, older than 20 and living in California or Florida.” Between 2010-2014, 338 cyclists in California and 329 cyclists in Florida were killed by motor vehicles. During that time bicycle-motor related deaths have increased by 16%.

I have seen some creative ways to solve safety issues, bike trains are one of them. LA Bike 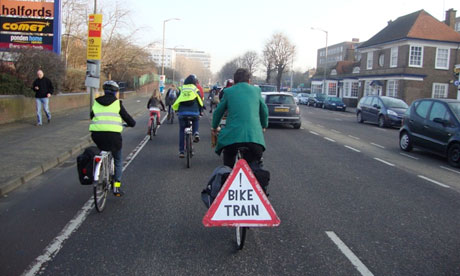 trains currently have ten routes and make commuting a little safer. Bike trains are a method of occupying a lane in the road with the collective power of multiple riders. It is like having collective bargaining power on the road. They form in residential neighborhoods and riders join each other for their morning commute and back. As they reach their destination they peal off, just like a train stop. They coordinate with other commuters to take the same route, same time and actually have lead ”train conductors”. . In a large group motorist tend to “behave”, but certainly this doesn’t solve the problem of the inpatient motorist. 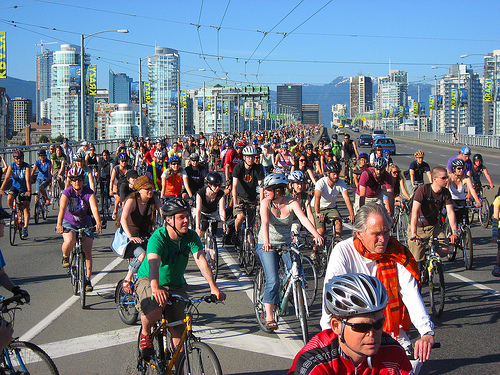 Critical Mass rides are environmental and bicycle activist that celebrate access to roads and streets with the concept of safety in numbers. It is a strategy for public awareness that bicycles are on the road and for some, a voice of dissent, often causing traffic jams and having motorist yield to the cyclists, requiring detours. Starting in Stockholm, Sweden in the 1970’s there are now 300 cities worldwide hosting Critical Mass rides. Typically they are held on the first Friday of the month during evening rush hour traffic. Probably the most notorious critical mass was in New York City during the 2004 Republican National Convention. I was a part of this spectacle and witnessed several random cyclists get beaten and arrested. There were over 260 arrests and New York City had to pay out nearly a million dollars in a civil lawsuit.

Enchanted Something or Another

It is now early summer and I’m back in New Mexico.  I’m taking refuge underneath a large 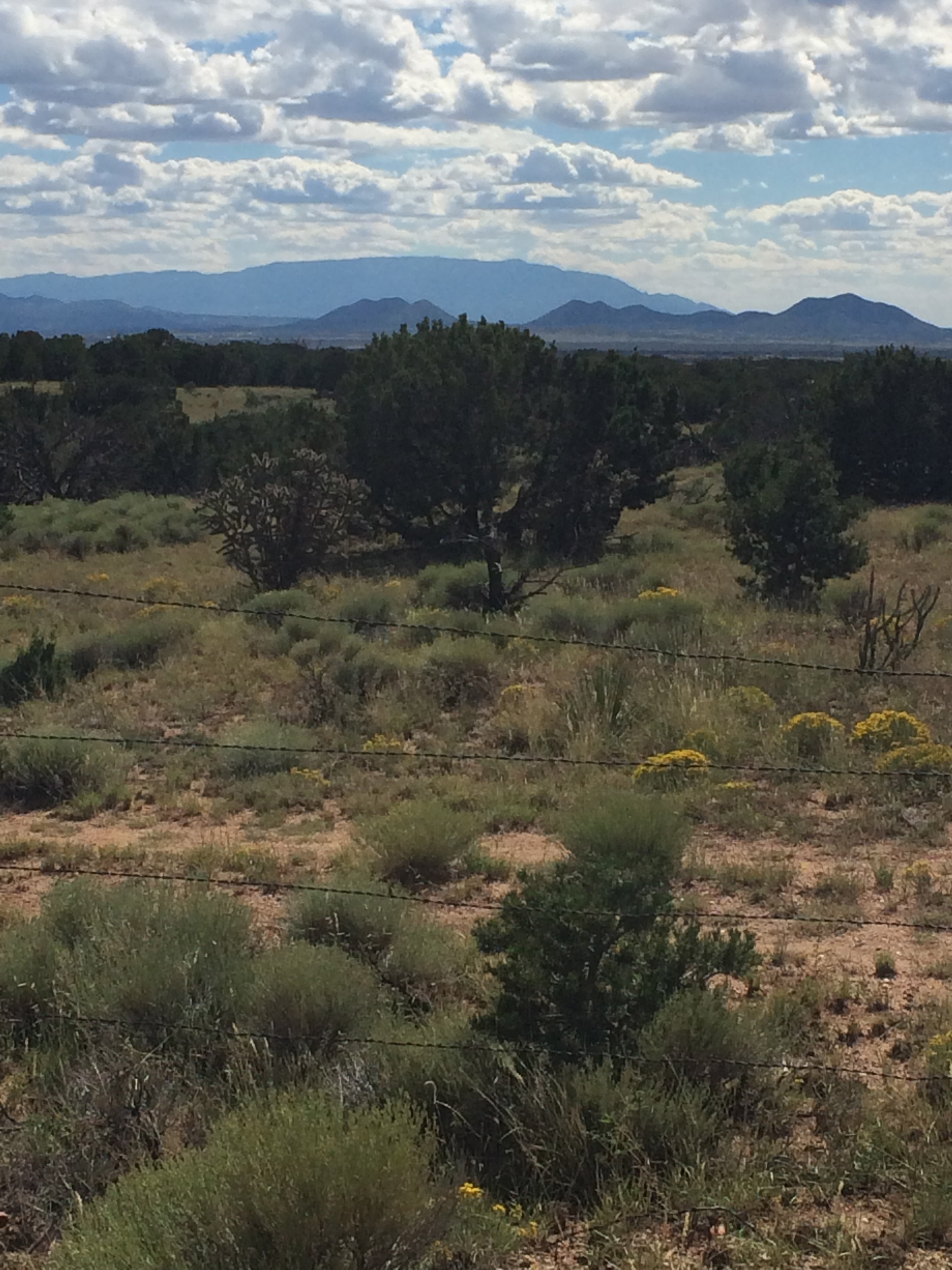 juniper tree; it is going to be a long summer. The mid-day desert sun reminds me how light-colored my skin is, unlike the Navajo or those of Conquistador ancestry. I’m riding back to Santa Fe from Eldorado on a railroad grade trail. This was my daily commute for several months and today I’m just riding from a routine medical appointment.  I was admiring the expansive panoramic view, wild flowers, bright cobalt sky when I heard a clunk! My left crank arm and pedal fell off. I stopped and opened my daypack only to discover that my multi-tool kit was at home because that morning I had switched bags and failed to put the tool-kit back. With no Allen tool I was forced to ride the remaining five miles with one crank and pedal. At first I cursed myself, just the thought of having to do this seemed formidable; but then it occurred to me that I have done this before. Why worry now?

It didn’t matter that my pedal fell off because I was with my bike. After all these years together my bike never disappoints. My affair with the bicycle has been going on for more than four decades and the positive memories abound, with just me and my bike taking on various challenges: forty-mile commutes, twenty-four hour races, blizzards, desert heat, epic rides on the backbone of the Rocky Mountains. When I feel the endorphins, everything is placid in my world.

And I still remember vividly when I was a boy and my father took the training wheels off my first bicycle. On my first-ever real bicycle ride, I rode right into my neighbors freshly painted garage door. I fell down, hurt myself. However, the thrill of riding a bike motivated me to do it again. That door could not stop me. Little did I know that one day this would become a metaphor for my life; and despite the odds, I would do it again and again and again. This would become My Cycle. 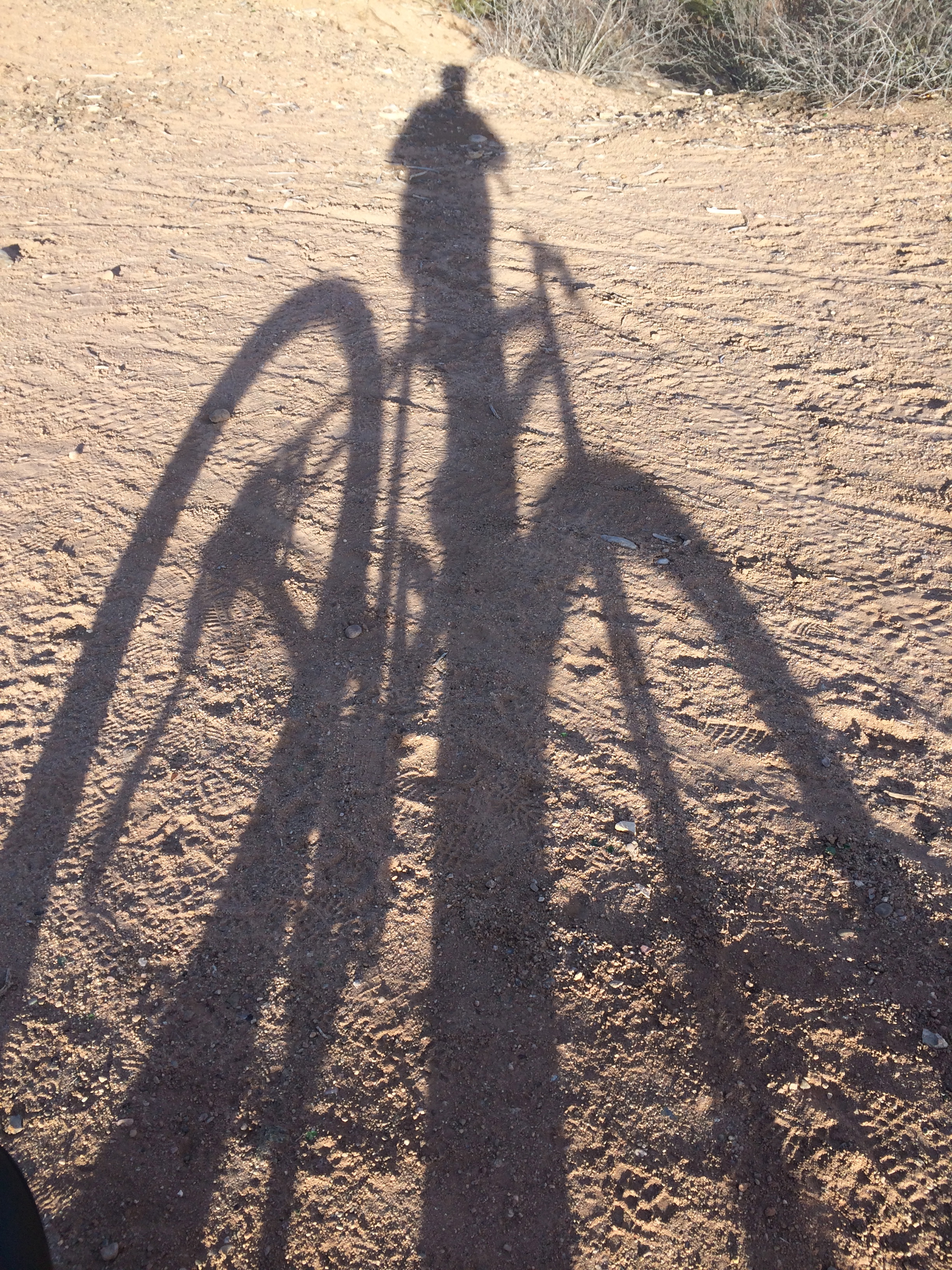