We are not night owls, we were asleep last night when this horrible event occurred and we were late getting up this morning.  Today was planned – this is the weekend and we would visit the Musée Jacquemart-André on boulevard Haussmann and then have lunch in some brasserie.

It was not to be.

Even before putting on the coffee Dennis checked his email told me there were hundreds killed and we were being inundated by concerned emails to which we responded – or attempted to respond – thumbs all thumbs – even before we turned on the television.  We watched the news, read the accounts, and waited for updates – I was shaking as I drank my tea!  Paris.

Even before we looked out the window I had registered a change in the sound-scape.   Perhaps that is why we slept in … there was not the normal noise, the cars, the garbage trucks, the people.  From the window I could see that it was quiet, there were very few people on the street – those that were, were walking alone or in pairs.   The café across the street did not open.  There was no one sitting and drinking coffee.  In fact, the whole city is quiet, everyone glued to televisions I expect.

We are in the south in the 14th arrondissement away from the events of last night – but we know the area where the killings took place.  Dennis and I had lunch at Place Republic on Wednesday.  The school they showed on the news as a backdrop for a reporter, was one we passed and on which I had remarked – Voltaire – how could one not learn there? 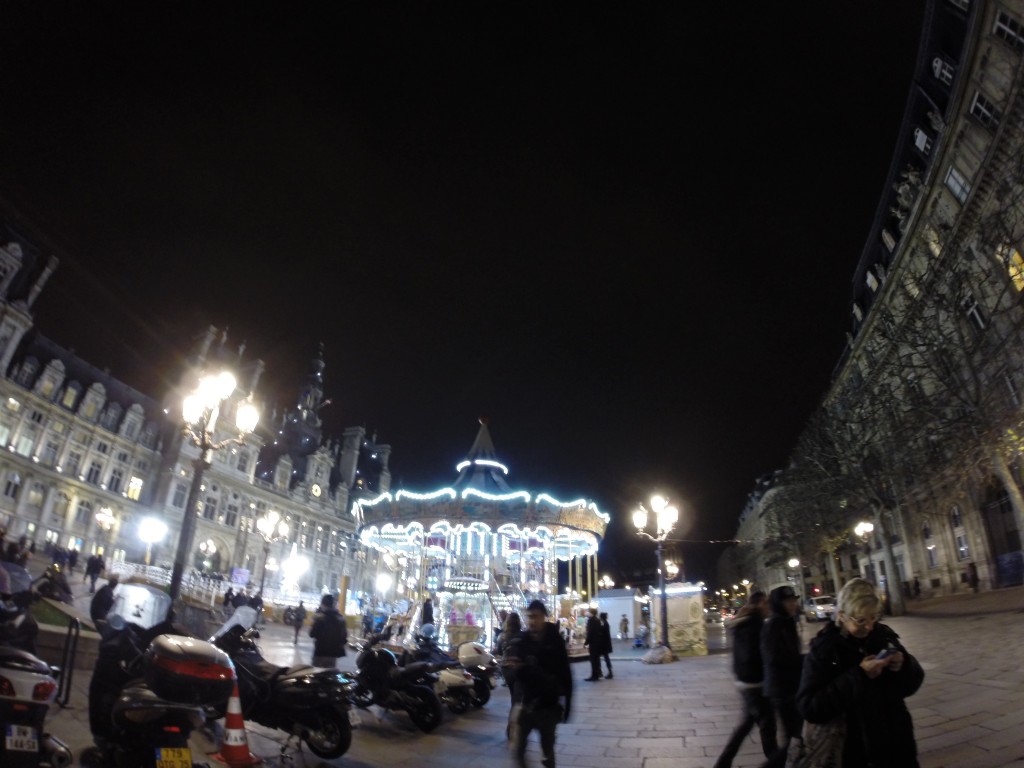 On Wednesday the Place Republic was full of young men, swarthy, sleeping rough, at noon huddled and chatting – one group warming their hands against an open flame burning in a small barrel.  A young man was riding a huge black bicycle, rented I thought, and I assumed he was learning as he seemed so delighted with his progress and continually rang his bell – ting – ting – ting – to warn others of his wobbly ways. 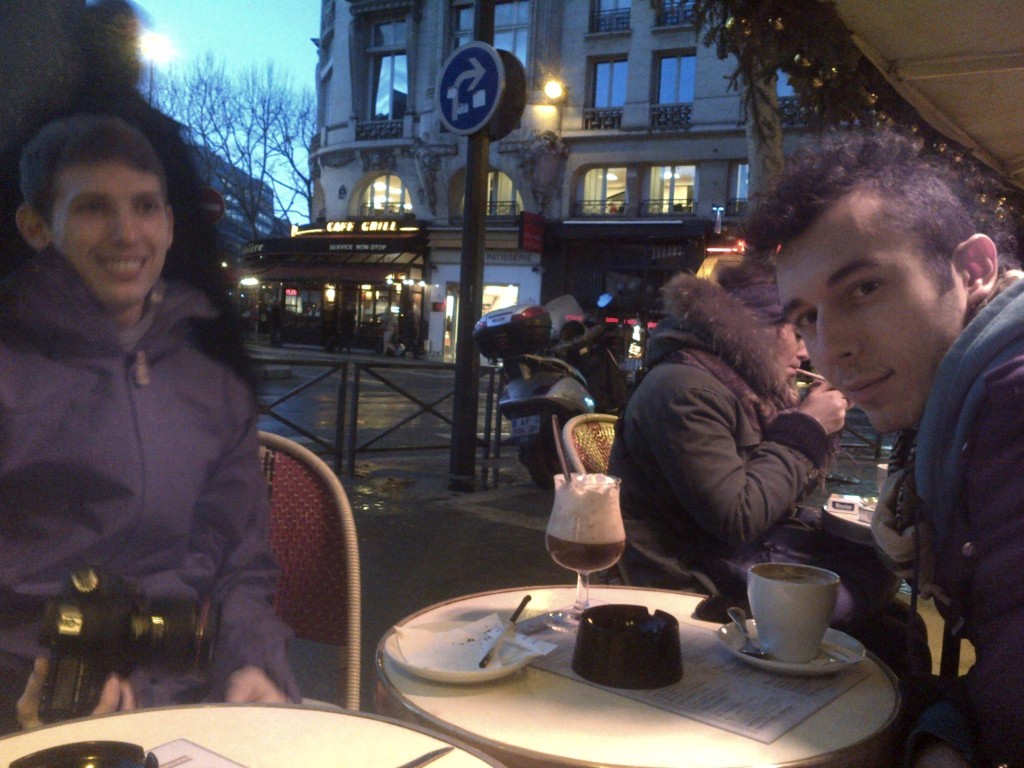 On Thursday I had a meeting nearby and had carefully studied the street and metro maps so I would be able to find my way.  The metro stops that are now closed were the ones I used. This is not meant as a “it could have been us” moment – we were far away – it was not us – it was not our experience.  And yet, even as I feel separate from these events I feel the distress.  There is a tear in the fabric of the city, it has been rent asunder – words my mother would have used to describe the extent of the damage.  This is not our home … but in the past month I have learned to love the streets, the buildings, the markets, even its sounds.  Ah Paris!

Today dawned grey and while I have become familiar with the view it no longer looks the same.  Perhaps there are fewer leaves on the Empress tree (huge rhubarb sized leaves) or perhaps it is the silence – few people and fewer cars.   We decided we would follow the directives issued by the city, we were not going to visit museums or explore, we would stay in the apartment, in the 14th, in our neighborhood.  By eleven o’clock we could not sit still and chose to do some errands – grocery shopping – right next door.  Is it normal that the grocery store was this crowded?  We were buying water – but then everyone was buying water – surely it is merely time to shop – not to stock up?  Is this normal? Perhaps we have never tried to shop on a Saturday morning in Paris?   Many of the smaller stores are closed and the museums are being shut down.  The Eiffel Tower is to be closed ‘til future notice … as is the Louvre.  We have tickets for tomorrow morning … we will see … art and life … Oh my Paris.

After lunch we decided to go for a walk, in search of bread, and as our own boulangerie was closed we decide to use it as an excuse.  People do not look at one another on the streets of Paris, but I find myself searching faces.  A man passes with his hand bandaged.  Would I have noticed yesterday?  Do these people know anyone who is missing or wounded or dead? How could they not?  How many degrees of separation?

It has gotten colder, or perhaps it simply feels colder, leaves and occasional drops of rain fell as we walked – like tears.  There is the smell of autumn – the end of something.  Is it on this walk when I realize that I am on alert, but listening or watching for what?  We are doing every day errands – we buy baguettes and a huge brioche – I love brioche – and even locate a butcher who is open – a halal butcher – for a saucisson  - would I have noticed halal yesterday?  Finally a bottle of white wine for dinner – comfort food – crème fraiche – butter – veal – mushrooms… Paris.

We were settled back in the apartment with both of us online looking at the events – the television is on in the background – and we are trying to make sense of what we are reading – when we heard the church bells.  Are these the ones we normally hear?  Are they simply more remarkable as there is less noise?  Or are they marking the dead?   In response I put two small candles in the window of the bedroom.  There is a ledge that will hold them.   I have no choice.  As I sit in the living room I am aware of more sounds, once familiar city noises they are now threatening, the sirens – police – ambulance – fire and even a simple car horn, an unexplained series of bangs – these are not unusual, there were always loud noises but tonight I wonder what each is.  I am on alert.  We are all on alert.  Poor Paris.

When we went to bed I found that my candle was no longer alone … across the street on balconies and in windows… tiny glimmers of hope.

Today Paris is quiet – the streets when we awoke this morning were empty of people – the first person I saw was the proverbial man with a baguette – then the dog walkers and now the bells are drawing people out of their homes.    So perhaps things are returning to routine if not normal.

The emails continue to arrive, a friend wrote of her response to President Hollande’s statement, “this is an act of war,” and I too feel the resonance.  In hindsight, I think that we had a hint of the reverberations that must have been felt by those in Paris who lived through or grew up in the shadow of WWII.  I now realize that many of the people stocking up yesterday were of that generation – they were indeed hunkering down anticipating what is to come.  It is not a story told about others, it is part of their social fabric.  Paris and War.

Today it is unusually warm, sunny, and the sky is blue.  There are more cars and people, but it is not a usual Sunday in Paris. We shall take our walk in the afternoon, perhaps visit the Montparnasse Cemetery. 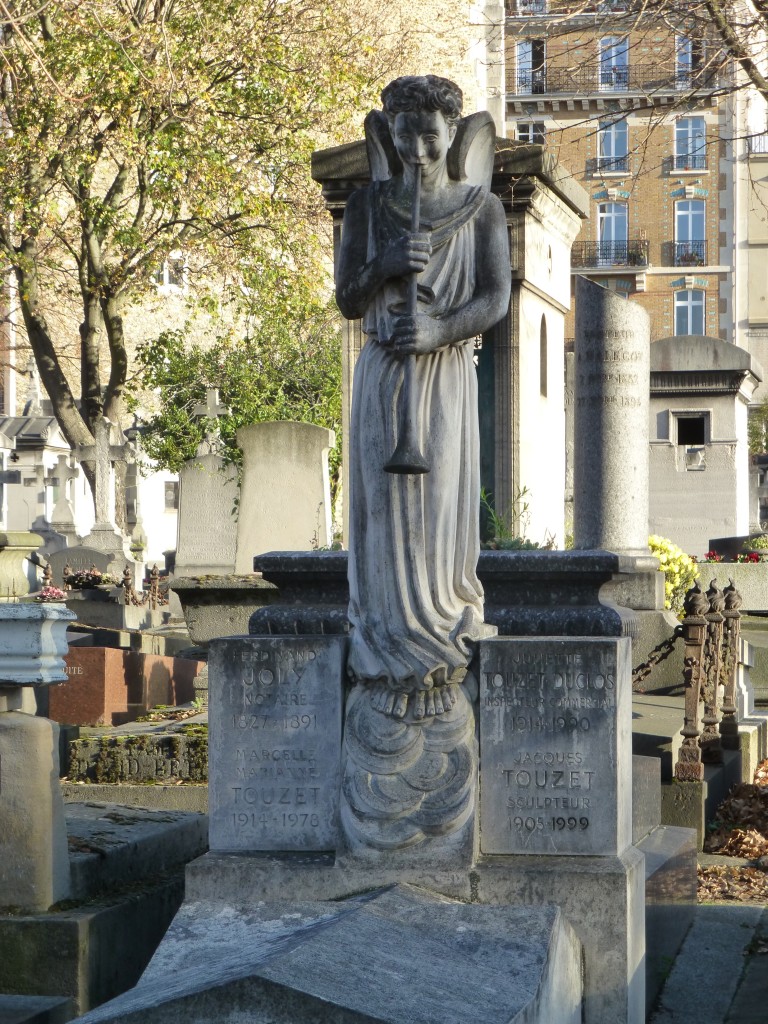 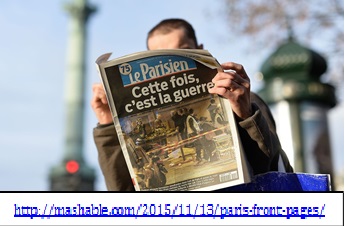 Note: The author and her husband are spending two months in Paris, both are on sabbatical from the institutions in which they teach.

Collage of newspaper headlines (see below)

Some of the latest front pages from UK and France