Thank you, she said… with her eyes expressing it so clearly that I did not even need to hear the sound of the words.

The peaks were soaring. It was astounding to say the least.

Walking towards the foothills one day, I experienced a magical morning – school children walking to school, the aroma of morning breakfast wafting from every household, and the chanting sounds of the Buddhist mantra “Om mani padme hum” flowing towards me from a distant monastery.  It promised to be a good day.

Walking towards the trailhead, where I was expecting my guide, I came across an old woman by the side of the gravel road with a basket full of tree branches by her feet.  When she saw me, she started talking to me in Nepalese while gesturing to the basket and her head.  She was asking assistance to put the basket on her head.  I started and realized it was pretty heavy.  So I had to put my backpack by the side and lift the basket onto her head.  She started climbing uphill, and then stopped, turned around, and said, “Thank you (Dhanyavad!)” with her eyes expressing the gratitude that made the words redundant.  I was touched because the woman looked like she had weathered the hard life lived on a dollar a day that is much publicized by the World Bank. In short, she did not have much.  And in fact much less than the people I meet in Colorado on a daily basis.

Yet the hard life had not hardened her, she made that extra effort to thank me, while the Herculean task of carrying the heavy basket up a steep hill awaited her.  How is she not bitter?  How did she not have the temptation to skimp on that small politeness which is actually not so common on the Indian subcontinent? 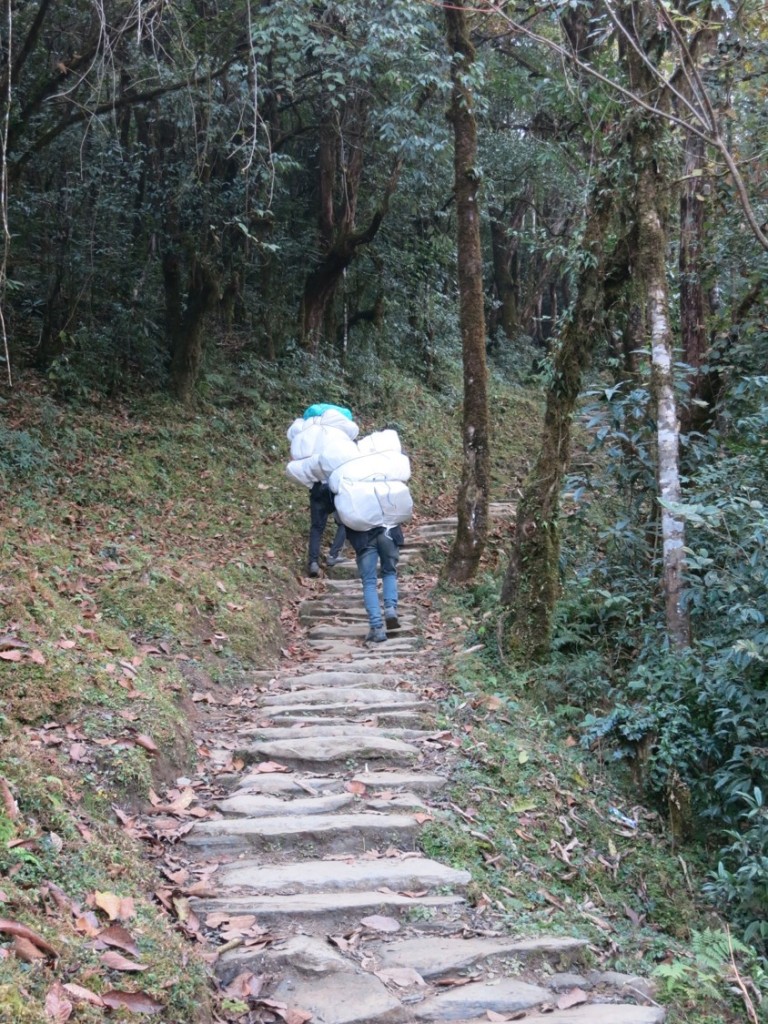 My guide had arrived by then and I realized that we were going to climb that same trail the old woman had taken. We met up with her soon since we did not have any heavy baskets to carry.  She smiled when she saw me passing her. I offered help with carrying the basket for her.  “It is my daily routine, don’t spoil my habits…” she smiled.  I walked the first half an hour of her daily two-hour uphill journey.  When she sat down for a drink of water, I asked her about her home, her childhood, her world.  She had lived here all her life, studied till fourth grade, married at 16, borne three kids, suffered the death of her husband  when she was 24, and had managed on her own ever since.  Her opinion of the world, “It is a mirror, you see who you are”.  Her opinion of the wealthy tourist and their opulence, “Good, they must have good karma from the previous lives.  God can’t be unfair.  This is not unfair”.

How can she be so tolerant when I was indignant of my own luxuries while she was suffering?   But what about those who are criminals, those who unfairly gain in this world or are out to destroy others? “Who am I to judge, isn’t there someone higher and better than me to judge?”  When I asked her of all  the violence in the world, her reply was simple, “ There is a lot of good.  Open your eyes to good and you will see good all around you”  “Love is the answer, if it is not, you are asking the wrong question”…those 25 minutes sitting with her were probably the most magical moments of my two week vacation.  Listening to her took me to a lofty place  that trumped  any majestic views of the mountains;  she could distill all the wisdom of the world in a smile and 25 minutes of pure, unadulterated conversation.

I returned to the US while it was in the throes of the primaries stage of the Presidential election campaign.  One of the Presidential hopefuls is a man called Donald Trump – billionaire, TV reality show host, real estate businessman, who wants to bully his way into the White House and also feels the need to overstate his wealth, his knowledge, his intuition, his schooling, his vocabulary, his extinct products, his body parts and so on.   He has perhaps not said one proper and decent thing on his campaign meetings. Every wrong thing he says he justifies under the phrase “I say it as I see it.”  Mexicans: he sees all of them as drug dealers and rapists; Women: he sees them as commodities to be categorized from 0 to 10 based on their level of external beauty; editorial board of major publishing house: “dummies”; rape victims: they should be punished if they  undergo abortion.  He has publicly mocked people with disabilities.  His hate list extends further to include Muslims, Blacks, Asians, Prisoners of War, four star military generals and anyone else who stands in the way of what he believes is his birthright – the  presidency.

“Saying as I see it” works only when one has good eyesight. Trump needs an appointment with the ophthalmologist!

He claims to speak as he sees it but he has consistently claimed ignorance of his own statements when they did not suit him and claimed supreme understanding of the world when it suited him.  Now I see it, now I don’t.  He was in favor in Iraq war till it went bad and then he was always against it.  He was in favor of accepting Syrian refugees but later wanted to send them back and remembered nothing of his previous acceptance of them.   He wanted women who undergo abortion to be punished by law before claiming that abortion laws are set in the country.  He has seen Muslims celebrating 9/11 attack on the streets of New York and New Jersey, which no other human has seen.  He has helped circulate false statistics which incriminate blacks.   All the while he maintains that he says it as it is.  This man is a pathological liar. It is estimated that 76% of his statements are verified lies!

He has closed down several of his endeavors as failed businesses while passing on the losses to the US tax payers, but claims to know business “better than anyone”.  He already claims that he is going to be the best president of the US, then hesitatingly adds, “may be barring Abraham Lincoln”.  “Everybody loves me”, this is from a man who is on his third marriage and has protestors at every meeting. “I know words, I have the best words” from a man whose vocabulary on last count was 42 words, of which 5 are “Trump”.  It is surprise that he has not claimed himself to be the most humble person on the planet!   He has a vocabulary of a second grader and at 69, he has manners of a pre-schooler.  James Oliver rightly equates him to a gold colored sharpie, something that has the appearance of wealth but is just a cheap tool.

Trump continues to fall to the depths faster than Hitler’s antisemitism, and has found support in certain corners of the US. The problem posed by Trump is embodied in his slogan: Make America Great – Again. There is nothing wrong with making America great. It’s a great cause to work toward. This country is already great and we will continue to work to keep it that way. The problem in Trump’s sloganeering is the use of the word “Again.” It is the again that is disturbing because it provides a flavor of greatness which was in the past and has been lost.

The word “again” harks back to the good old days and the interpretation of good old days is dangerous in a time of social change. The good old days could be a time when wives were waiting on husbands, slaves being exploited for free labor on farms, and so on….. The world continued to move forward integrating one and all on equal footing but “again” some want to pull the world back, so that they can once again find their version of the good ol’ days, the one where all are not equal but one dominates over another.  That’s the constituency of Donald Trump.  Unfortunately Trump has ensured that the only support he gets is that from racists.

Supremacist groups have been emboldened by Trump’s rabble rousing. The lynching, the initiation of which has already begun in Trump’s rallies, will not be far away. His campaign manager has been arrested for battery on protesters.  Fifteen year old girl was pepper –sprayed and groped by his supporters.  Trump has further warned the Republican party that if he is not selected as their candidate, there will be riots. He and his supporters want to go back to the past even if it by violent means.  If you believe I am scaring you, let me be clear, “Be very scared of this rhetoric, for the Germany of the 1930s does not seem too far away!” The 1930s were a time when Germans wanted to go back in time before the ignominy of World War I.  They were looking to make Germany great again and did not withhold violence while trying to do so!

Once you get on this train of “lets go back to the good old days again”, there is no getting off. You hurtle into the dark tunnel of a not so distant past when dominion of one over another was the norm and hating all “other” groups was common place.  .

Instead of learning from history and opening people’s eyes, the media has struck a Faustian bargain and are flaming his policy-pruned, hate-infused, rhetoric-rich, ideology-inane candidacy to garner viewership.  When hate mongering is on the agenda, Fox news always leads the way.  The presenters instead of discussing xenophobia, misogynistic attitudes, and crassness,  have succumbed to asking Trump if they have treated him fairly while he calls every minority names on national media.  Fox news can learn many lessons from Huffington Post, but one of them for now is the succinct post-script Huffington puts after every article mentioning Donald Trump. “Editor’s Note: Donald Trump regularly incites political violence and is a serial liar, rampant xenophobe, racist, misogynist and…………………….”

Despite having the luxury of billions, how can this man be so intolerant of the world that gave him so much? How does billionaire Trump compare in humanity with the impoverished Nepalese woman who lives in peace and shows love towards all.  How can the Nepalese woman, who after all the suffering and toil, injustices of many life-times, continue to demonstrate tolerance and kindness to strangers, while Trump with all his billions wants to throw his own brothers out? Trump, with billions of dollars to back him, will fight with the wind. The woman, with the heavy burden on her back while climbing uphill, will embrace her enemies and change them with kindness.

How does Trump’s greatness compare to that of an old woman in some unknown part of the world? What kind of human behavior would make America great? Would it be the Trump kind or the humanity exhibited by a poor, single mother? After all, democracy puts the choice in our hands, so what do we choose for the next four years? Humility or Arrogance? Love or Ignorance? Thank you or F*&k you? 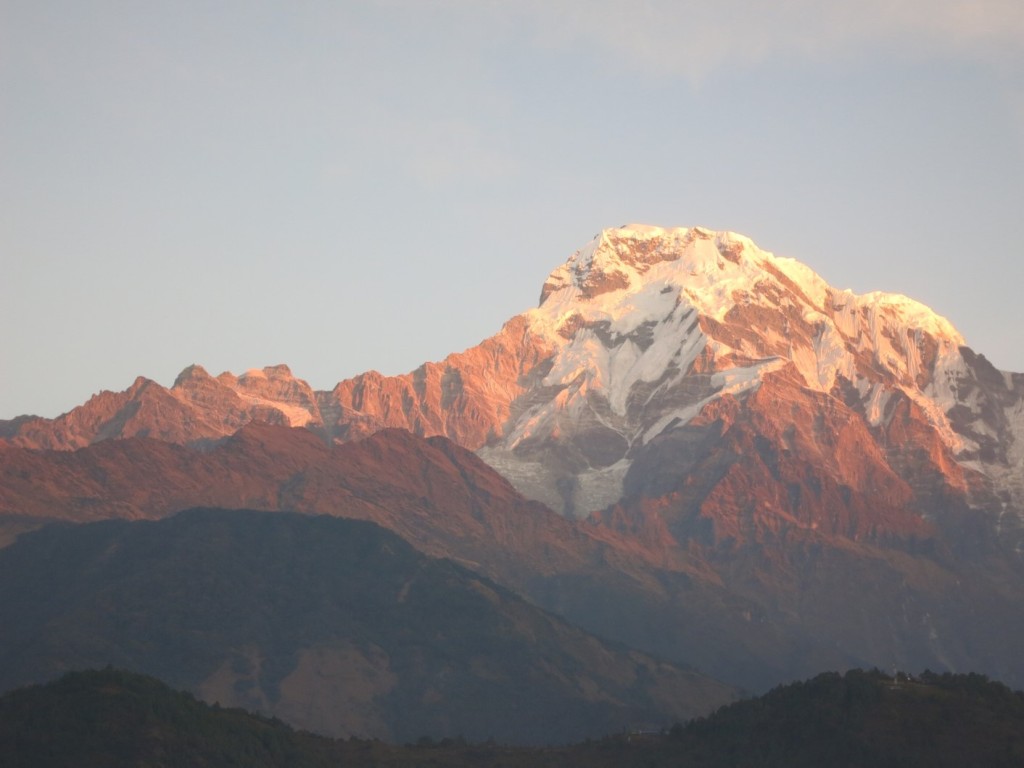