The obsession with mobile phones clearly demonstrates the mental pathology of our generation; people would much rather speak on a mobile than to another human. First, the craziness to click selfies was simply annoying; but now it has led to senseless killing of animals; just for a selfie!

Technology, the application of scientific knowledge for practical purposes, supposedly makes human lives better; but, does having this ability in our hands give us the license to kill?

A spate of cruel selfie-incidents in recent times is shameful for all humans. There are pictures of people dragging animals out of their habitat, beating them with sticks, stepping on them, mutilating and killing various species ranging from turtles, swans, sharks, leopards, lion cubs and fishes – all for the sake of a selfie.

The Essayist has collected stories of selfie-related animal torture published in various newspapers and magazines around the world to give you an idea of what our fellow human beings are doing for a selfie. A “Stop this Selfie” movement is in order and maybe an enforced ban too. Let us see which country is humane enough to take the lead and make us believe in humanity?

People drag turtle out of the sea, hit it with sticks, stand on it for selfies

An endangered loggerhead sea turtle was dragged out of the sea at Havana Beach, Beirut (Lebanon). The turtle suffered a painful ordeal when people stepped on it to take selfies, and then beat it with sticks. Suffering serious injuries, including cracked bones on its head, the female turtle was rescued by the nonprofit Greenarea and is being rehabilitated by the charity group Animals Lebanon.
Source: http://news.nationalgeographic.com/2016/06/sea-turtle-stepped-on-for-selfies-injured-rehabilitation-lebanon-beach/

Woman violently drags swan out of the water for pictures, killing it

A female tourist in Macedonia, dragged a swan from the lake by its wing, onto the pebble-strewn shoreline in order to have pictures clicked with it. Witnesses reported that despite the swan visibly struggling to be freed, the woman continued to smile for the cameras holding the bird, and left it for dead after she was finished with the photographs. 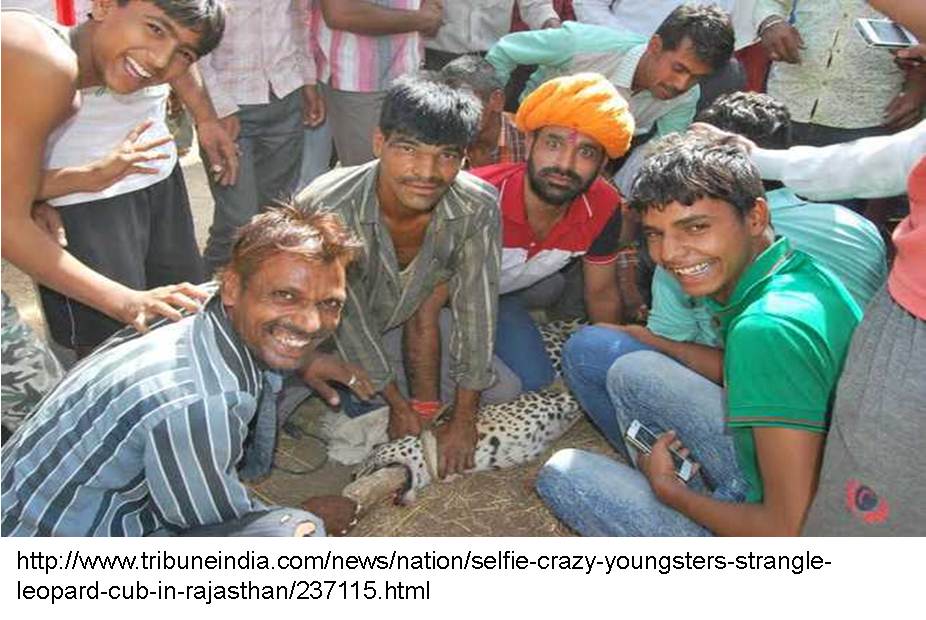 People kill a baby leopard which forayed into the village in the process of trying to get pictures clicked with it, Rajasthan, India. Villagers of Kachhabali village, Rajasthan, strangulated a baby leopard which had strayed into the human settlement. The sight of the leopard cub attracted a big crowd, which chased it, put a noose around its neck and dragged it, suffocating it to its death. The people surrounded the cub and continued to click selfies with it, pulling its tail and sitting on the animal.

Shark dies after tourists drag it out of water for pictures

A group of tourists and lifeguards in Dominican Republic, dragged a shark out of water to click pictures with it, killing the animal in the process. The men raced into the water to catch the shark, entangling it in the ropes of a life ring. It thrashed violently to escape, but the men continued to pull it ashore, where it writhed in agony before dying.
Source: http://www.mirror.co.uk/news/world-news/shark-killed-after-tourists-drag-8223240

A baby La Plata or Franciscan dolphin, a species that can live up to 20 years, died of suspected dehydration after it was paraded among the people on the beach who stroked it and clicked pictures. Its dead body was then abandoned on the sand as people continued to click pictures.

Peacocks die after visitors grab them for selfies 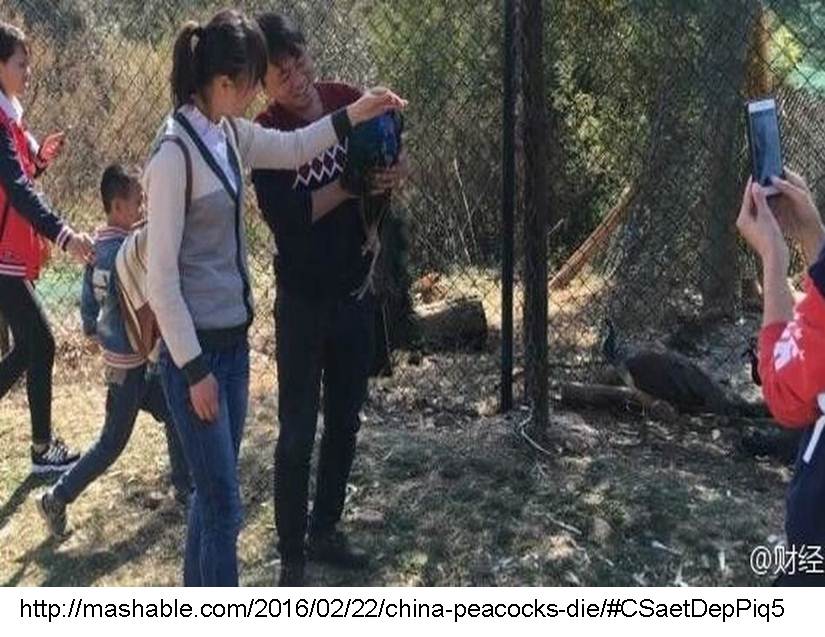 Despite explicit signage in the zoo in China prohibiting visitors from touching peacocks, people manhandled the peacocks in order to stroke them and click pictures with them. This caused their vibrant feathers to be plucked off resulting in the animals going into shock, causing their deaths. 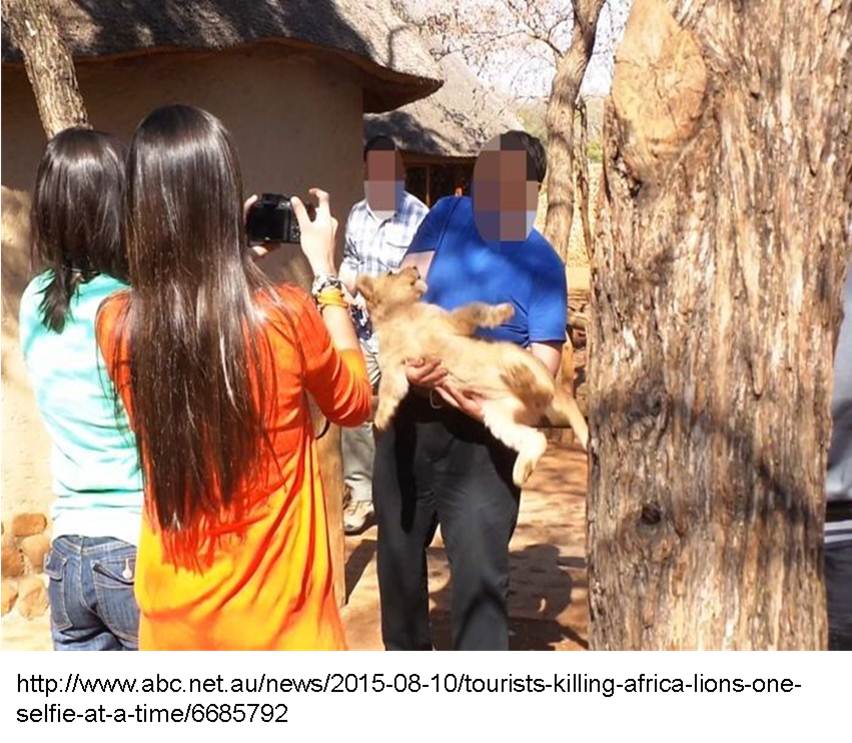 In South Africa, lion cubs are bred after separating them from their mothers. They are then forced into facilities where they are used as props for photograph sessions by visitors, who usually manhandle them. Once the cubs grow, they are introduced into canned hunting facilities or euthanized. (Canned hunting refers to the practice of lions being released into an enclosure within which it becomes easy from hunters to shoot them.)
Source: http://www.abc.net.au/news/2015-08-10/tourists-killing-africa-lions-one-selfie-at-a-time/6685792
http://www.worldanimalprotection.org/sites/default/files/int_files/lion_report.pdf 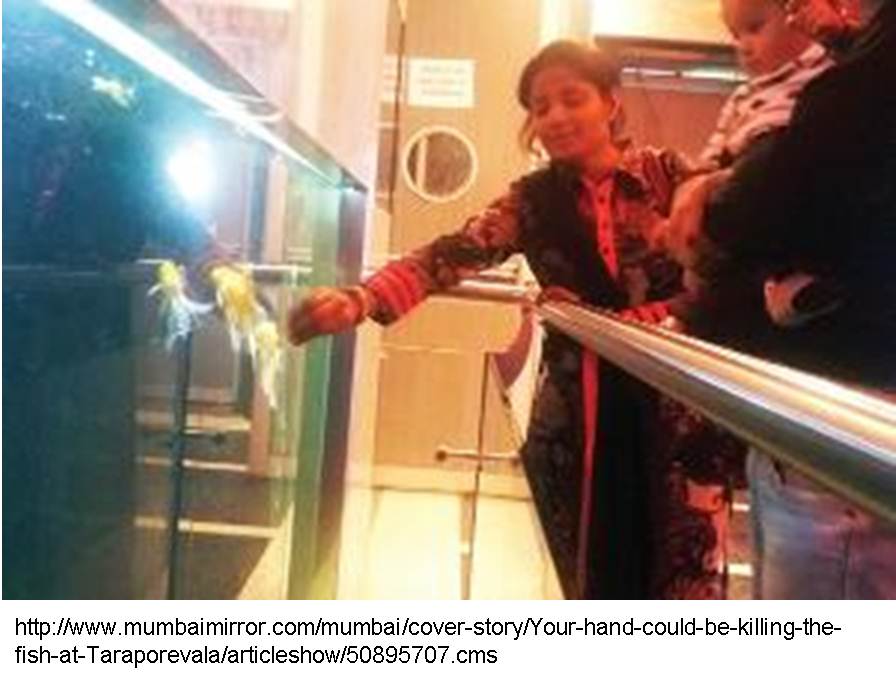 After the reopening of the Aquarium in March 2015 in Mumbai, India, more than 2000 fish belonging to about 228 species have died. This is primarily attributed to the trauma caused to the fish by large numbers of visitors tapping on the glass of the fish tanks and the flash of the photographs taken.
Source: http://www.mumbaimirror.com/mumbai/cover-story/Your-hand-could-be-killing-the-fish-at-Taraporevala/articleshow/50895707.cms

What is a selfie?

A 21st century word meaning a photograph that one has taken of oneself, typically with a smartphone or webcam and shared via social media sites such as Facebook, Snapchat and Whatsapp. The word “selfie” made it big in 2012; it was one of the top ten buzzwords according to Time magazine. By 2013, the word “selfie” had become extremely common and was included in the online version of the Oxford English Dictionary.

So – what is a selfie? A photo of oneself – just that – or does a selfie represent something more?

The popularity of the selfie may have led to the recent mutations. In the beginning of the fad (maybe 2012 and 2013), the photographer and the viewer were content to see photos that consisted of ‘duckfaces’ of the person taking the selfie. That was supposed to be cute and funny, and worth sharing or liking on Facebook. However, in this age of attention span disorder, the duckface of the selfie-taker soon lost its novelty. It became boring and did not get the ‘likes’ the selfie-taker desired.

Selfie-takers had to innovate and mutate to satiate the vampire-like thirst for novelty of the hyperactive masses on social networks and social media sites. So, in addition to oneself, the selfie-taker started including elements alongside or in the background that showed the selfie-taker in an interesting light to his social network. This coincided with the notion of bucket lists – places to visit and things to do. So there were selfies taken in front of famous monuments, inside fancy or popular restaurants, drunk in pubs, a road trip, a painting in a museum, some fancy car, an installation, and finally an animal.

The aim is to somehow get the attention of the social network – do whatever it takes to get noticed and get those likes on one’s social media page.

Today, every selfie-taker is thinking like an advertising industry man – How do I capture those eyeballs?

Everyone is advertising. And what are they advertising? How different or unique they are?

Thus, the selfie-taker is in a constant state of mental cogitation – wondering what it is that will capture the eyeballs of the viewers on the social network. The selfie taker now starts seeing the photograph and the world not just through their smartphone camera but through the eyes of the person who will see the photograph. What will evoke that viewer’s interest and make them like this selfie rather than just ignore it?

So when taking selfies with animals the selfie-taker automatically assumes that this would get the attention of their contacts. The selfie-taker has assumed that the known viewer of the photograph will actually like this- think of it as cool or awesome or some such primitive brain reaction. Thus, the selfie no longer shows the individual in a poor light; it actually reflects on the people in their entire social network. This is the tragedy of the Internet and of social media. Instead of the internet becoming a platform for intellectual freedom, it has become an arena of stupidity and most importantly murderous selfishness.

While people think of themselves as individuals, they seem to have become more conformist than people in a remote tribal village in ancient times.

In this age of inevitability of technology – of smartphones in every hand and robots in every house, it is time for us to go back to the three critical questions that guide moral thinking as proposed by philosopher Alasdair MacIntyre.

However,  those who take selfies incessantly and make duck-faces, do you think will they even bother with such philosophical questions. They are not interested. You cannot stand in front of moral philosophy and take a selfie, can you?

However, if some humans are willing to kill another animal, another living being, just to get their 15 likes, then don’t you think it’s time we went beyond philosophy and made laws that would make the social network stop and pause before handing out likes without discretion? You give one un-thoughtful “like” to a selfie or picture that depicts possible torture of an animal, and you can end up in prison – just like you would if you killed a human being. It’s high time we spoke for the rights of animals and other species to have a better life on this planet?

Technology, the application of scientific knowledge for practical purposes, should now make animal and other species’ lives better. That would be the human use of technology.

And to all those who clamor and shout for Internet freedom, think about the animals and living species that are being killed because you are fighting for the freedom who has no sense of what freedom means?

With great freedom comes great responsibility! While you fight for the freedom of some virtual world – the real planet is dying?